Real-time reporting of fine particulate pollution levels recently began at nearly all 35 monitoring stations around Beijing. Even monitoring stations near roadways - shut down before the Olympics to manufacture improvements in reported air quality - have been reopened, and with better equipment.

But, with air pollution levels again reaching hazardous levels, China Daily voiced the continuing frustrations with the government reporting in a news story headlined: ”Air monitoring system comes under fire”. While the article highlighted complaints about the government keeping the data secret and not allowing access to archived data, the real issue is what the new monitoring has already revealed.

The US embassy twitter reports of hazardous air pollution on October 8, 2012, in Beijing – viewed by tens of thousands of Chinese on their smartphones – were not surprising. What was shocking was that the trial reporting by the Beijing Environmental Monitoring Center was also listing air quality as “severely polluted”. At the same time, however, the still official reporting by the Beijing Environmental Protection Bureau based on coarse particulate was only “slight” air pollution.

The discrepancy in the government assessments, due in part to the types of pollution measured, is a reason for concern, but it gets much worse. The combined average coarse and fine particulate concentrations (particles smaller than 10 microns, PM10) reported at the Chinese monitoring station closest to the US Embassy were often less than the reports of the subset, fine particulate (particles smaller than 2.5 microns in diameter, PM2.5) measured alone at the same location. This should not happen.

If a block of coal weighing one kilogram is divided in half, one of the halves should certainly not weigh more than the whole. But, this is the reality of air pollution reporting in China. To be fair, there can be discrepancies between monitors at the same location, but this startling discrepancy appears to be far from isolated, and many monitors reported combined readings suspiciously near to that of the fine particulate alone at the same location.

The dangers of fine particulate

Fine particulate is primarily from combustion, including from motor vehicles and power plants. In the case of Beijing, coal combustion has been identified as the largest source. The percentage of fine particulate in the combined measure of fine and coarse particulate, which includes soil dust, varies but is typically around 50%, according to the World Health Organization.

In Beijing, due to coal-fired power plants and trucks, the percentage of fine particulate may at times be as high as 60-75%  but, logically it should not be above 100%.

Because the fine particulate measurements are still in a trial phase, the reported levels have much less significance to government bureaucrats - although certainly not the public - than the combined measurements. Fine particulate is so small that it can get into the lungs and blood and cause respiratory and cardiovascular morbidity and mortality even at very low concentrations.

US ambassador to China Gary Locke said
: “It’s the really invisible stuff that can really cause a lot of damage to respiratory systems and health. It’s almost akin to being exposed to secondhand smoke constantly, or even smoking several packs a day.”

Masking the severity of air pollution


The combined measurements used in China over the past decade have not been found to be as good an indicator of the health impacts of air pollution; however, they are still used to evaluate officials and monitor compliance with environmental targets in China.

One of the authors attributed the discrepancy in part to “unwritten rules” that authorise officials to mask the severity of pollution. Again, in this study the monitoring was done at different locations making it difficult to firmly establish manipulation. However, now, government monitors appear to be in conflict with government monitors at the same location.

There is increasing international and Chinese consensus that one of the primary air pollution concerns is fine particulate, which has severe impacts on human health. Due in part to public pressure from US embassy twitter reports of hazardous pollution levels beginning in 2008, the Chinese government has begun to implement real-time monitoring and reporting of fine particulate across the country.

Although monitoring of fine particulate was conducted previously, the results were not publicly reported. Last year however, the Chinese media actually reported that government research institute monitoring found fine particulate levels have been increasing in the capital over the past decade. But, then the government appeared to change its mind and reported that air pollution levels have actually decreased.

It would be fair to ask whether air quality has actually been improving, or just the manipulation.

On a positive note, the newly released fine particulate data seems to be fairly consistent with the US embassy reporting. At the Chinese monitoring station closest to the US embassy, the daily average during the most recent hazardous pollution episode was only 1% lower than reported by the US embassy monitor.

This indicates that data manipulation is likely occurring in the government’s coarse particulate measurements and not the new fine particulate reporting – at least for now.

In the fourth paragraph the article says that PM10 is fine particulate, and PM2.5 is coarse + fine particulate. I believe it's actually the reverse- PM2.5 is the fine stuff, and it's a subset of PM10. If I'm right, you may want to fix that- and check whether it's a typo in the article, or a mistake in the analysis behind the article.

Steven Q Andrews is an environmental and legal consultant based in Beijing. He completed a JD at the UCLA School of Law, and previously studied geosciences at Princeton University. His research on Chinese air pollution began while he was a Princeton-in-Asia fellow in Beijing during 2006-2007.

The biggest obstacle to environmental protection in China is not a scarcity of funds or technology, but a scarcity of motivation, says Ma Jun of Chinese non-profit group IPE.

US scientists have used satellite data to assess a decade’s worth of PM 2.5 levels. Angel Hsu, one of the team, explains what they found. 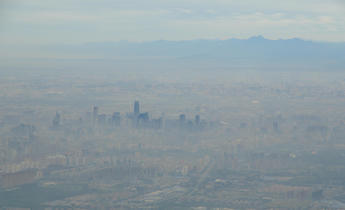 Battle of the blue skies

Competing claims about air quality in Beijing have propelled Steven Q Andrews's research into the centre of a public debate about smog. Olivia Boyd and Meng Si look at the fallout.

In the first analysis of US embassy “Twitter” data on pollution, Steven Q Andrews finds major failures in Chinese air quality assessments. Tighter standards are on their way, but will continue to fudge the health risks.