After reports of pesticide residue in traditional Chinese herbs, Greenpeace has profiled three farmers, highlighting the low-level of awareness of health risks

The excessive use of chemical fertilisers and pesticides in China is a major problem. Figures from the Chinese Academy of Agricultural Sciences’ (CAAS) Soil and Fertiliser Institute have shown that in half of Chinese provinces, average levels of nitrogen fertiliser use exceed the internationally accepted limit of 225kg per hectare.

As well as degrading soil quality, overuse of pesticides has also been linked to food safety problems, as shown by the high levels of pesticide residue recently found in traditional Chinese herbs.

Chinese agriculture appears to have become worryingly over-reliant on using pesticides. “Farmers use these chemicals as they feel like it,” Xu Ming, from the Ministry of Agriculture, told chinadialogue last year. “The Ministry of Agriculture has standards for use, but if the standard says to use one bottle cap’s worth of pesticide the farmers will use three, just to make sure.”

Although there are agricultural technology offices in China’s villages, Xu Ming has said there is no way to monitor what individual farmers are doing. As the following three case studies of herb-growing farmers show, investigated as part of Greenpeace’s ‘Heal the Herbs’ campaign, the problems are deep-seated and illustrate the need for better education, not only about the harmful consequences of pesticides, but also the possibilities of using more environmentally-friendly alternatives.

Like many of the honeysuckle growers in the area, Auntie Ye is illiterate. When asked how to manage powdery mildew, she takes a bottle of carbendazim from her basket. She selects her pesticide based on its shape and colour, rather than the dense lines of description on the bottle’s label. 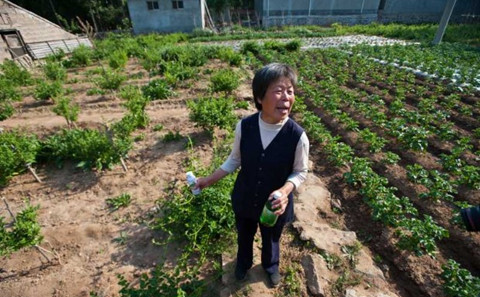 Auntie Ye says she is always careful to pay attention to any recommendations from the pesticide sellers, but she has never been told which pesticides are highly toxic, and that she must avoid skin contact with them. Wearing gloves and masks seems, to her, an unnecessary precaution. As far as she knows, pesticides have not been banned by national legislation so they must be safe. Yet in her hand she holds a bottle of omethoate, a pesticide that has been banned.

Auntie Ye sees no reason to separate her vegetable garden from her honeysuckle fields, and applies the same pesticides to both.  She mistakenly believes that washing the vegetables is enough to remove any pesticide residue.

The only creatures she protects from the pesticides are her chickens. She senses they are more sensitive to the chemical's deadly effects, so she places fencing around the chicken shed and tries to avoid letting them have direct contact. As for her eight year old grandson, she lets him play in the fields where pesticides are sprayed.

Xiaogui has seven or eight years’ experience growing the herb sanqi. Like many people in his village, he and his sister's sole income is dependent on farming. The entire Wenshan area specialises in growing Sanqi, with every household planting at least a few acres of the herb.

Sanqi is a very labour-intensive herb to cultivate. Firstly it should be grown on "virgin land", which means at least two or three fallow years before it can be planted. Secondly, it must be planted alongside other plants supported by poles, in order to create shade. All of this means extensive manual labour. 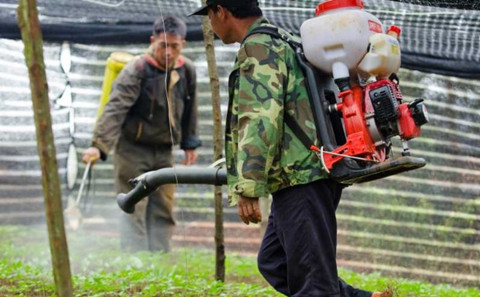 In Yunnan, women usually pick the herbs, while men sow the seeds in January. Sanqi is extremely  vulnerable to pests and disease, so farmers have become accustomed to applying a mixture of pesticides.

Xiaogui says that during planting he uses particularly potent pesticides such as carbofuran and phorate. As it is used to kill insects that live underground, it is usually sprinkled directly onto the soil. This is combined with a variety of other pesticides applied once a week or, during the rainy season, twice a week. Xiaogui says he has never really been taught how best to use these pesticides – he has just worked it out himself.


Xiaogui is not familiar with the harm these pesticides can cause to his health. This means that when he and his sister's husband are handling these toxic chemicals, they wear little protection. Xiaogui's brother-in-law reports feelings of dizziness when mixing the chemicals in the pesticide tank, but no one in the village bothers to wear a mask or gloves, so neither do they.

Xiaogui's daughter is currently in fourth grade, and on the weekends will help out on the fields by weeding or catching mice. Xiaogui's four-year-old son also likes to play in the field. His family isn't careful about keeping the pesticides away from the children and, after spraying, they only use a simple detergent to wash their hands and clothes.

Xiaogui acquired his pesticides from Chinese herbal medicine traders, who did not once ask about his methods of application. The farmer says he has no idea where his herbs are sold.

Whenever beekeepers run into Uncle Li, they tend to bring up pesticides and ask when he's planning to spray. That's because Uncle Li's honeysuckle field is located right next to a bee farm, and bees are highly sensitive to pesticides. As the bees are most active in the day, Uncle Lee only applies pesticides to his crops after six o'clock and tries to do so away from the beehives. 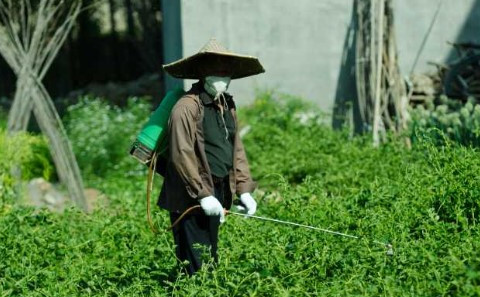 Uncle Li has been planting honeysuckle for as long as he can remember - it's a practice that extends back generations in his family. It is a perennial plant, and every year he applies pesticides at least twice: once at the end of March when the plants are beginning to sprout, and again in May when the flowers bloom. He commonly uses the pesticides omethoate and carbendazim, and the amounts grow more concentrated when the flowers bloom. This is also when the bees will be more active around the plants, and thus risk being more exposed to the toxins. Less than one week after the flowers bloom, he picks the honeysuckle.

Uncle Li is convinced that rainwater will simply wash away any residues, or that after two or three days the residue will disappear on its own accord. When we showed him a mask and a pair of gloves, he reacted with ambivalence, telling us that farmers are already accustomed to working with pesticides without special protection. Doing so would simply feel cumbersome.

When discussing the honeysuckle of his hometown, a look of pride appears on Uncle Li's face. He tells us production in the region is most authentic, and that the country's largest pharmacies all source their honeysuckle from the area.

Big traditional Chinese medicine companies like Tong Ren Tang do not directly buy from Uncle Li. They acquire his honeysuckle through middlemen, which means Uncle Li can never be sure exactly where his goods end up. These middlemen have no interest in pesticide usage; they only look at the honeysuckle colour and quality when deciding whether to buy.

What's the point in investigating farmers?

Since there are are no safety systems in place to monitor agricultural food products, farmers will inevitably do whatever they feel like. Even if they are aware of the huge amounts of poison, they will not simply give up selling it, otherwise how could there be so many illegal traders?

While traditional Chinese herbs are believed to help the treatment of many diseases, the level of pesticide residues found in some test samples could prove to be harmful

Study draws link between low-level exposure to organophosphate pesticides - the most widely used insecticides in the world - and long-term brain damage.

Getting Chinese agriculture off its nitrogen fertiliser addiction

China could halve the amount of climate-damaging and polluting nitrogen fertiliser it uses in some regions, without affecting harvest levels, says study

Exposure to a mixture of pesticides is causing declines in bee productivity and numbers, according to a new study, with major implications for global food production. 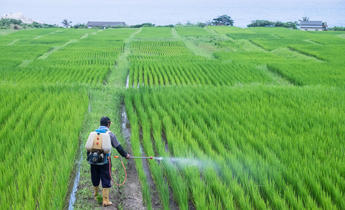 The damaging truth about Chinese fertiliser and pesticide use

Overuse of fertilisers and pesticides is causing pollution and food safety problems. What’s more, Chinese agriculture has now become reliant on these chemicals.

After more than 900 arrests over the selling of fake meat, including rat as mutton, officials face an uphill battle to change a fraudulent culture

Changing diets, food safety scandals and water use present a challenge that Xi Jinping must tackle in the next decade

A decade of food safety in China

Ten years of scares have ingrained a sense of crisis in the public psyche. Solving the problem will mean looking again at industrial food production, writes Xu Nan.