San Francisco’s 40-year quest to control its ozone levels has many practical lessons for China’s fight against PM2.5 air pollution

Beijing and San Francisco share the urban challenges of high costs of living, especially for housing, traffic congestion, social activism, and a growing disparity between rich and poor. In addition to the two regions being about the same size, both regions share a high potential for adverse air pollution due to the extensive mountain ranges surrounding the regions.

Table 1 shows a basic demographic and economic comparison of the two regions.

However, the San Francisco region has previously suffered from high levels of ozone, particulate and PM2.5 air pollution, especially during the late 1960s and 70s. Its cleaner air is the result of more than 40 years of comprehensive air pollution control. Understanding how it achieved this could be of value to Beijing and other cities suffering from similar pollution problems.

The next important step occurred at a national level. Modern day air pollution control efforts in the US began with the passage of the 1970 Amendments to the Clean Air Act (aka 1970 Clean Air Act). The current US Environmental Protection Agency (EPA) was also created in 1970.

Given the rigorous requirements of the 1970 Clean Air Act, the San Francisco region began preparing mandatory State Implementation Plans (SIP) to meet national air quality standards in the early 1970s; this laid the foundation for the region’s air quality strategies.

To reduce ozone, pollutant reduction measures need to be targeted at the ozone precursors, reactive hydrocarbons (also referred to as volatile organic compounds) and nitrogen oxides emissions. The major air pollution control efforts of the San Francisco region since the 1970s have been targeted at reducing volatlie organic compounds and nitrogen oxides emissions from all possible sources.

Herein lies another parallel between the Bejing and San Francisco regions: both are prone to high levels of ozone or photochemical smog. During the 2008 Olympics in Beijing, for example, the Blue Skies campaign to promote clean air for the Olympics was a strategy largely designed to lower ozone levels by reducing volatile organic compounds and nitrogen oxides emissions from cars, power plants, industrial sources, and construction activity.

Every measure proposed and included in the SIP needed a cost analysis, assessment of technical effectiveness and feasibility, and implementation schedule. Not surprisingly, during the 1970s and 1980s, most industrial control regulations were applied to large facilities, e.g. chemical plants, refineries, auto manufacturing, power plants. Depending on the specific industry, EPA, California and regional authorities required either reasonably available control technology (RACT) or best available control technology (BACT) for the facilities. Similarly, motor vehicle controls began with private cars due to their large numbers.

California set even more stringent auto emission standards than the US EPA, requiring the cleanest cars in the world be produced for California. To complement these tight standards, California also adopted requirements for annual inspection and maintenance of in-use vehicles to ensure private cars would continue to meet stringent exhaust emission requirements during the lifetime of their use.

As a result of the SIP and control measures implemented during the 1970s and 1980s, ozone violations in the San Francisco region became less frequent and occurred with less severity, i.e. peak readings. Instead of having 70-90 ozone violations per year, now the violations were occurring about half as frequently. This was clearly a significant improvement, but insufficient to meet the requirements of the Clean Air Act.

Meteorological factors are also very important in determining ozone levels. Two years with approximately the same levels of pollutant emissions can result in very different peak levels of monitored ozone, particulate and PM2.5. Depending on the region, natural emissions of volatile organic compounds and nitrogen oxides can be significant as well.

Due to their nature, however, reliable estimates of natural emissions are difficult to make, and although estimates are included in most emission inventories, there is considerable uncertainty in these estimates. For planning purposes, most studies assume natural emissions are relatively constant over time and difficult — if not impossible — to control with human intervention.

1. Further control of the large stationary sources regulated in the 1970s and 1980s;

6. Regulation of small and medium size businesses that are sources of volatile organic compounds;

7. Implementation of measures to improve traffic flow, promote carpooling, and more transit use; and

8. Initiation of control programs for days with high ozone potential.

Taken together these additional programs significantly reduced volatile organic compounds and nitrogen oxides emissions throughout the region, further contributing to improved ozone air quality. The programs affected thousands of businesses and solicited the participation of the entire region. Through mass public education — newspapers, TV, radio, internet — everyone was asked to be a part of the regional efforts to clean the air.

As new control technologies were developed, tighter regulations were adopted for specific industries. Thus, a factory that had reduced 85% of its pollutants during the 1970s might be asked in the 1990s to further reduce its pollutant emissions by another 67%, resulting now in 95% reductions compared to its unregulated operations.

This regulatory approach had several positive outcomes. Large stationary sources slowly, but steadily continued to be a smaller part of the regional air pollution problem. With ongoing technological improvements in control effectiveness, large companies were continually upgrading their control equipment and processes.  Many companies were able to adapt to the tighter regulations, and some prospered because the new processes often increased the company’s productivity.

However, some companies were not able to adapt and closed, or moved out of the region, sometimes to a less regulated environment in another state or country. Today, San Francisco has less manufacturing and industrial activity than 40 years ago, with the regional economy having been transformed to more knowledge-based and cleaner industries.

Dr. Eugene Leong is former Executive Director of the Association of Bay Area Governments (San Francisco). For the past 7 years he has been a Visiting Professor at Peking University, in the College of Environmental Sciences and Engineering.

The big debate: what really saved the ozone layer?

The phasing out of ozone-eating CFC molecules is hailed as one of the world's greatest environmental success stories. But was it governments or technology that really saved the day? Two experts share their views.

Deaths associated with fine particulates in Beijing, Shanghai, Guangzhou and Xian hit 8,570 this year according to a new report from Greenpeace.

The high levels of air pollution recorded in Shanghai are damaging the economy, environment and public health 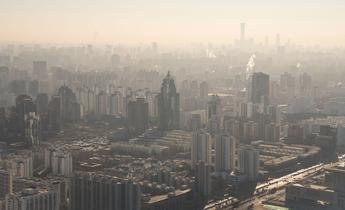 Liaoning province, in north east China, has set a precedent by fining some of its cities for air pollution, but there are doubts that this approach will be enough to combat the country's smog

The high levels of air pollution recorded in Shanghai are damaging the economy, environment and public health

China to use artificial rain to combat air pollution

Technology was the key factor in saving the ozone layer

Technological advances on CFC alternatives helped to “grease the skids” for policy action, creating a virtuous circle that started long before the Montreal Protocol was signed.

The world's governments saved the ozone layer. They can save the climate too.

The Montreal Protocol, which celebrates its 25th birthday this year, saved millions of lives and slowed climate change by a decade. With China’s cooperation, it can now do even more.