As fears over food safety grow in China, companies are letting customers trace their products via WeChat, the country’s most popular messaging app

Han Jia-Hwan is schooled in the ways of WeChat. But the 58-year-old chairman of China’s largest chicken meat processor, Dachan Food (Asia), isn’t interested in using the popular messaging app to chat. He has a grander scheme.

It starts with a simple swipe of a smart phone. Dachan, which slaughters 180 million chickens every year, plans to show customers its entire supply chain by assigning each product a QR code, a complex pattern that can be scanned by the messaging app.

“By scanning the code, customers can immediately see in WeChat which farm produced the chicken, how it was fed and who processed it,” Han said. “We control every step and now we are letting everyone see it.”

Dachan is not the only food company laying bare its production process. As anxiety grows in China over environmental degradation and its potential impacts on the food chain, big Chinese companies are using similar schemes to prove the safety of their products.

China’s top diary producer, Meng Niu, also lets customers trace its products via WeChat. Meng Niu saw its sales suffer after the 2008 tainted baby formula scandal. Its profit declined 21% in 2012 when a batch of milk was found to have been contaminated with aflatoxin, a carcinogenic mould found in corn grown in humid climates.

The poultry industry faces equally big risks. Dachan and its peers were hit by last year’s outbreak of H7N9 influenza, while the high prices of corn and soybean animal feed have added to its woes. At a time of weaker demand and higher production costs, the Taiwanese company reported a net profit of 310 million yuan from its mainland China operation in the first half of 2013, a 10.2% decline from the same period in 2012.

Could the QR code-scheme help? Ma Ji, an economist at China Agricultural University, said the public was likely to see it as a marketing stunt. Ma said it is hard for consumers to assess a product’s quality via the traceability system and, if they scan the codes at all, they are probably doing it for fun.

“A food traceability system is very costly,” he told chinadialogue. “But do consumers really care to know which farm produced their food and the name of the farm owner?”

“People just want their food to be safe. If a traceability system helps to improve a company’s overall management, then it is a good thing. If it is used for marketing, then it doesn’t help to increase consumers’ confidence.”

The official launch of Dachan’s WeChat plan is scheduled for the second half of 2014. The new scheme is designed as an improvement of the company’s current traceability platform, where consumers have to manually type codes into Dachan’s website to locate the producers and see pictures of their farms.

“China is catching up in food safety,” he said. “We want people to feel safe via our traceability system. We plan to incorporate footage of the production sites as well.”

“The internet is changing a lot of things,” he added. “Hopefully consumers’ confidence will change as well.”

Dachan also aims to launch an online market where only traceable food will be sold, according to Han, who said the market would be open to any supplier able to trace his production process. The goal is to build the site into a Chinese version of Whole Foods, the largest organic retailer in the United States with 265 stores nationwide.

“Vegetable, fruits…everything in this market shares the same DNA. Every product is traceable,” he said. “ Dachan will be the biggest supplier of eggs, meat and milk.”

Han said development of the e-commerce site would be gradual. If everything works out well, he said, the site may eventually evolve into an individual company.

The biggest challenge in China is how to make people care more about traceable food, according to Han, who said Dachan is working on presenting the health impact of its production process in a better way.

“We want to be very, very specific,” Han said, without disclosing the exact cost of the company’s food traceability system. “We are thinking about how to communicate better with consumers as well.”

The Chinese government also wants to address the country’s vexing food safety issue by rolling out various traceability mechanisms. It has built some 15 trial programmes in different cities and is encouraging big companies to take the lead.

Huang Runqiu, a representative of the southwestern Sichuan province, proposed during China’s parliamentary meetings in March that the system be expanded nationwide to allow the origin of any food safety problem to be traced.

But Ma said the system might not be the best way to guarantee food safety. Rolling it out across the country would be very expensive, and the cost may eventually be borne by consumers, who are already seeing food price inflation.

It would be better to establish regional food traceability systems to cover major production bases, according to Ma, who said the task would require much more coordination among local governments.

The central authorities also need to train more professional inspectors to put a stop to high profile food-safety incidents such as cadmium-tainted rice and rat meat sold as lamb, according to areport published by the Beijing-based nonprofit group, Forum on Health, Environment and Development. It says that the state regulator – China Food and Drug Administration – needs another 40,000 people to do a proper job.

Eventually, food safety comes down to China’s soil and water. In a country where years of breakneck growth have left the environment heavily polluted, protecting food safety is long-term work, Ma said: “Ecological safety is paramount to food safety. No matter how tough the food safety laws are, food will not be safe if the ecology is damaged.”

Wang Yue is a reporter in chinadialogue's Beijing office. 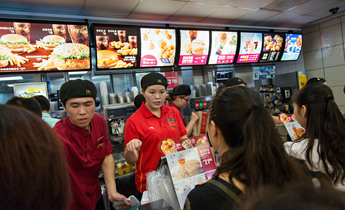 China facing bigger dietary health crisis than the US

Dietary shifts to meats, sugar and oils are creating a health and environment crisis that Chinese officials ignore, says Barry Popkin, coordinator of the China Health and Nutrition Survey

Takeover of Smithfield Foods will satisfy Chinese pork demand, but may not resolve food safety worries

Disease is a complex problem for Chinese farmers, and the veterinary system is not up to the job, says former state vet Jia Youling