The Ladakh valley’s Phyang village, in India’s northernmost Jammu and Kashmir state, is an oasis amid the desert of the Himalayan plateau. Ethnic Tibetans farm and herd here, but since the turn of the century climate change has resulted in a severe water crisis. In particular, during the planting season in April and May, agriculture suffers from a lack of water. This worsens desertification, creating a vicious circle.

In 2009 chinadialogue published “The Iceman of Ladakh”, an article about retired civil engineer Chewang Norphel who pioneered a simple way to create artificial glaciers to irrigate farmland in high-altitude deserts. The project won funding from the Indian government, but it was soon halted because of technical difficulties.

In the past few years, water shortages in April and May have worsened, forcing some of the residents of Ladakh to leave and become “climate refugees”. Phyang is the largest village in Ladakh, with 2,000 people, and almost all families are farmers. And water supplies are scarce – only about 300 litres per person each month.

Sonam Wangchuk, a local engineer and founder of the SECMOL Alternative School, decided to try and solve the problems that had hampered Norphel’s glacier project. Wangchuk believed the project had limitations because the artificial glaciers had to be built in shady spots above 4,000 metres, which were difficult for villagers to reach. The channels leading down from the artificial glaciers also needed a lot of maintenance – meaning the villagers had to trek up and down the freezing mountains. Also, the ice melted quickly when temperatures rose in spring, raising the risk of flooding.

Wangchuk noticed that the speed of glacier melt was related to the surface area of ice exposed to sun and wind. If ice was stored in a cone shape, with vertical sides so only the small top surface is exposed to direct sunlight – unlike ice fields on the flat ground or glacier surfaces – it could be stored in villages at lower altitudes. A cone of ice 20 metres wide and 40 metres high stores about 16 million litres of water. The same amount of water stored in a 2-metre thick layer would have five times the surface area and would melt five times as fast. 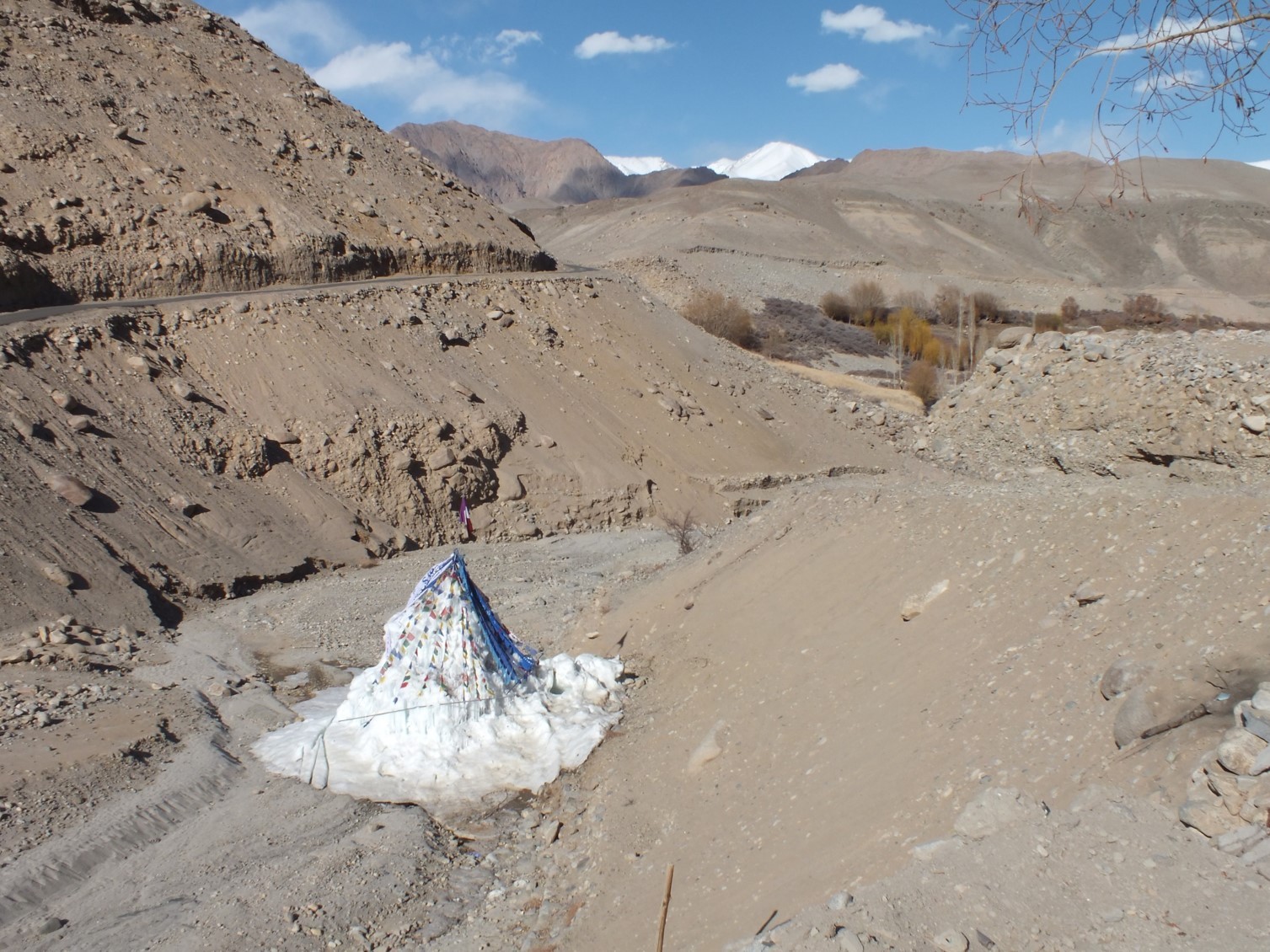 
In early 2014, Wangchuk and his students built a 6-metre tall prototype of an ice cone. It was a simple process: an underground pipe brought water from the river upstream to a piece of barren land in the village. In temperatures of 20 degrees centigrade or more below zero the water froze instantly and the team built up the structure layer by layer.

The locals call it an “ice stupa” because it resembles traditional Buddhist monuments. Although the ice stupa is exposed to the sun, it melts very slowly. The first stupa survived until May 18, melting away entirely when temperatures reached 30 degrees centigrade.

The news of the potential solution to water shortages quickly spread through Phyang. Drikung Kyabgon Chetsang Rinpoche came to bless the ice stupa on May 1 and hung traditional Tibetan prayer flags from it for good luck and to provide a little extra shade.

The Rinpoche’s support has been integral to the project, according to Wangchuk. With his funding the village formed an ice stupa committee, led by Wangchuk and a lama from the local monastery. The Ice Stupa Artificial Glacier project was launched by the Rinpoche and Sh. NN Vohra, the governor of Jammu and Kashmir, at an international conference on climate change adaptation in October.

Three to five large ice stupas will be built in Phyang, by the end of the year, enough to irrigate 50 hectares of land in the spring. Eventually 80 large stupas will supply water for the entire Phyang valley. “This will not just benefit Phyang and Ladakh, it will also benefit arid areas which have cold winters worldwide,” the Rinpoche said.


With the concept itself proven the biggest challenge is the cost. In the past when the people of Ladakh built stupas they relied on ‘hala’, a system of donating labour based around the monastery. In this digital age the team has asked for crowd-funding worldwide.

Although the target of US$119,000 has not yet been reached, work on the project has already started. In late November the team completed 2.5 kilometres of pipes. “These are held in place and covered by reinforced concrete and should last 25 years,” Wangchuk explained. “In the future we want to experiment with robotics, using solar-powered machinery to automatically build the ice stupas. Currently the water outlet at the tip of the stupa has to be raised manually as the stupa grows bigger.”

The Rinpoche and local NGO Go Green Go Organic are now discussing the possibility of a solar-powered sustainable urban development at Phyang monastery: thanks to solar power, the broad deserts of Phyang could be turned into a green city. It is hoped income from green development can be used to set up a university in Ladakh. Technology used in mainly tropical India is not applicable here, so the university will research and solve the particular problems the region faces.


SECMOL - the Students' Educational and Cultural Movement of Ladakh. A - See more at: http://www.reachladakh.com/in-conversation-with-sonam-wangchuk/1560.html#sthash.gZKFq7Ko.dpuf

Guo Xin is a reporter based in Beijing.

We have squandered any reasonable chance of keeping within 2C of climate change unless we take draconian action, says climate scientist Kevin Anderson

The iceman of Ladakh