One of the most important consequences of climate change will be its effect on agriculture. A lot of research has focused on food scarcity as the world heats up, but the connection between agriculture and health goes beyond mere calories.

Global Burden of Disease reported that, in 2010, the greatest number of deaths worldwide was attributable to imbalanced diets, such as diets low in fruit and vegetables and high in red and processed meat. Climate change is likely to make the problem of imbalanced diets worse.

To analyse the effects of climate change on diets and body weight, we used a series of computer models. We initially used models that estimated changes in temperature and rainfall around the world under different climate scenarios. The results of these models were then used in global crop models which estimated changes in crop growth around the world.

We then used these changes in a global economic model that projected the market reactions to those “shocks”, for example, changes in the area used to plant crops, price changes, changes in global food trade, and finally, changes in food consumption worldwide. Based on the economic results, we were then able to calculate changes in the number of deaths associated with changes in diet composition and body weight.

Our models showed that about half a million additional deaths would occur due to reductions in fruit and vegetable consumption alone. Climate-related reductions in red meat consumption mitigated part of that health burden, but not to a large degree.

About 75% of all climate-related deaths were projected to occur in China and India. In China, the burden is mostly due to reductions in fruit and vegetable consumption, while in India, it’s mostly due to increases in the number of people being underweight.

What to do about it?

Two things can be done to address the health effects we found. First, the health effects of climate change diminished with the severity of climate change. Were the world to follow a path of lower emissions, then the health impacts of climate change would be reduced – by about a third if current emissions reduction targets are met, and by more than two thirds if more ambitious emissions reduction targets are met (that is, ones that will keep global warming at less than 2C by the end of the century). But governments and industry will need to do a lot more if we are to achieve the latter.

Second, a prudent approach to the problem of changes in food supply as a result of climate change would be to put more emphasis on preventing and treating ill health related to imbalanced diets. This could be by increasing fruit and vegetable consumption, and by considering the whole weight distribution instead of just changes in the number of people who are underweight. And we need to move away from just looking at how much food there is to also considering what food there is.

This article was originally published in theconversation.com and can be found here

Marco Springmann is a researcher at University of Oxford. 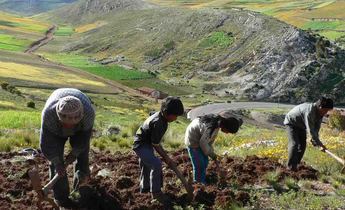 Is industrial farming a tech-fix or dead end for tackling climate change?

China’s government pushes potatoes as an alternative staple at mealtimes in a bid to cut pollution, curb water use and reduce reliance on costly food imports

By 2050 there will be 2.5 billion more people on earth. How can they be fed? Science’s answer, writes John Vidal, is a diet of algae, insects and meat grown in laboratories.