In a disappearing section of Louisiana coastline, the people who call Isle De Jean Charles home are moving to save their community and culture, writes David Hasemyer

The sacred land in coastal Louisiana that a small community of Native Americans has called home for more than a century has been all but swallowed by the rising sea, leaving residents with little dry ground and a fear they will lose their heritage.

Now a US$48 million federal grant will allow the band of Biloxi-Chitimacha-Choctaw Indians of Isle de Jean Charles to move away from their vanishing home. The funding for the relocation will make the tribe one of the first — and so far the largest — populations in the US to be resettled because of climate change.

The money, from the US Department of Housing and Urban Development (HUD), is part of a program designed to make communities more disaster-resistant. For the Biloxi-Chitimacha-Choctaw Indians, that means moving their whole community north to higher ground when a suitable site is identified in the next several years.

The slice of land that has supported the Biloxi-Chitimacha-Choctaw Indians through trapping fishing, and agriculture for 170 years is rapidly being swallowed by the Gulf of Mexico.

Since the 1950s, the tribe has lost 98% of its land to rising sea levels, coastal erosion and flooding. The island, about 50 miles south of New Orleans, once covered 15,000 acres, but the land has eroded to a tiny strip measuring a quarter-mile wide by a half-mile long, according to a report by Northern Arizona University. 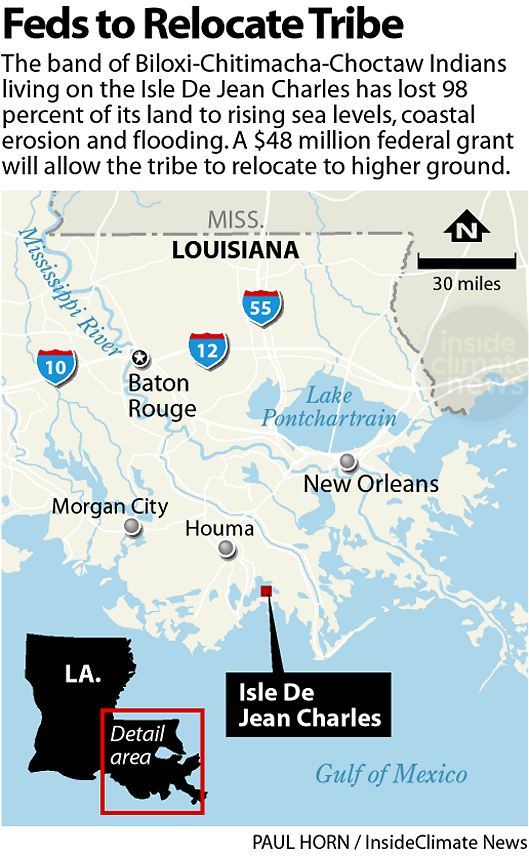 "As the people leave, our culture goes with it," the tribe's deputy chief, Boyo Billiot, said during a video news conference Tuesday. "We are looking for a place we can be a community. That means a place we can care for each other, celebrate with each other and be together as family and friends on a daily basis."

Many of those forced from their island home have told Billiot they will move to the new community. He said he looks forward to handing down to the next generation the history of the tribe and passing on the traditional handcrafts that include sewing casting nets and weaving palmetto leaves.

For those assisting the tribe with its move, the relocation serves not only as a way to preserve a community but also as a model for other communities facing the inevitable loss of their homes to rising seas.

"We have numerous communities along the coast in danger of losing the land they live on," Patrick Forbes, executive director of the Louisiana Office of Community Development, said at the news conference. "What we can do here is get the community resettled to a place where they will be safe and maintain their culture and create a model for other communities."

Jeffrey Thomas, a New Orleans attorney specialising in environmental protection and disaster recovery, said the relocation is exceptional both for its large scale and for its sensitivity to the people's heritage.

"It's one thing to move a handful of people out of a floodplain but this is a matter of  moving a whole community and keeping it together," he said in an interview with InsideClimate News.

"This is a culturally identifiable community with a heart and soul," Thomas said. "This community has existed so long that just unplugging them individually would be to extinguish the community.  Keeping them together means keeping the fiber of their community strong."

The tribe's website describes the land as a place of "immense physical beauty and great biodiversity.

"For the people of Isle de Jean Charles, the island is more than simply a place to live. It is the epicentre of our people and traditions. It is where our ancestors cultivated what has become a unique part of Louisiana culture."

The threat to the tribe has come not only from climate change but from other human activities such as oil and gas development that has caused a decline in sediment deposits from the Mississippi River. 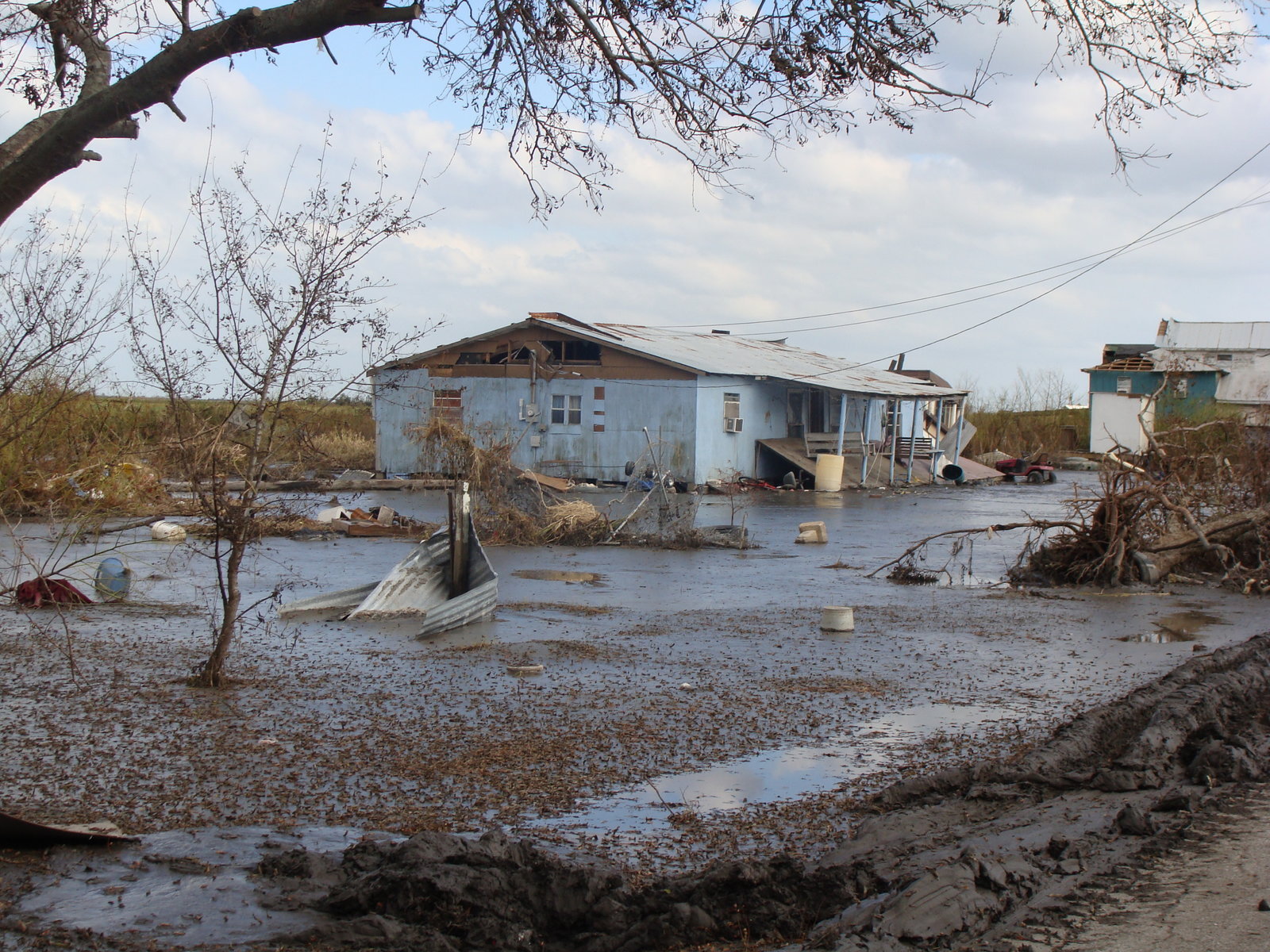 The people of Isle De Jean Charles have had a front-row seat to sea level rise.（Image by Karen Apricot, via Flickr)

The funding stems from Louisiana being named one of 13 winners in HUD's National Disaster Resilience Competition. The state was awarded US$92.6 million for the resettlement of the tribe and for the implementation of LA SAFE, a program designed to address coastal subsidence and other land loss.

Statistics from the Environmental Protection Agency show sea level has risen by 8 inches in the last 50 years in coastal Louisiana where the Biloxi-Chitimacha-Choctaw live.  (Threats to coastal Louisiana are compounded not only by rising sea levels, but by the fact that the land is also sinking, because the marshlands are eroding without new silt to replace it.)

At the same time, a new study by researchers at Stetson University and the University of Georgia shows that rising sea levels will jeopardise the homes of more than 13 million Americans by the end of the century.  Florida will be hardest hit while Louisiana is second most vulnerable, according to the study published in the journal Nature Climate Change.

"We are an invisible people and for so long have been out of sight and out of mind," she said.

The relocation of the Biloxi-Chitimacha-Choctaw people will help fold discussion of Native people into the climate change conversation, Houska said in an interview with InsideClimate News.

"When environmental justice issues are on the table, the Native people are forgotten," she said. "It's hard to be such a small population and still be heard, but we are facing the consequences of climate change and our voices must be heard."

Native Americans are among some of the most vulnerable to losing their homes to the onslaught of climate change.  Along with the Biloxi-Chitimacha-Choctaw of Louisiana, a number of other indigenous communities face the prospect of becoming climate refugees.

In Alaska, the Inupiat Eskimos of Kivalina, a community 625 miles northwest of Anchorage, may have no more than a decade before erosion begins to force people from their homes. The rising Chukchi Sea  is swallowing the isolated village of 374.

The plight of the village came to the attention of President Obama last year during his tour of Alaska to see first-hand the effects of climate change on the state.

"For many of those Alaskans, it's no longer a question of if they are going to relocate, but when," Obama said.

On the outer coast of Washington's Olympic Peninsula, the small village that is home to the Quinault Indian Nation is protected from the encroaching Pacific Ocean by a battered sea wall.

The Quinault tribe has developed a US$60 million plan to move the entire village of Taholah uphill and out of harm's way. That will mean moving the school, the courthouse, the police station and the homes of 700 tribal members a safer distance from the encroaching Pacific.

Natives of the Marshall Islands in the Pacific Ocean are beginning to leave the atolls as rising seas and severe storms that threaten to inundate their homeland, which sits six feet above sea level in most places. Over the years, the Marshall Islanders have fled their homes, with thousands settling in the Ozark Mountains of Arkansas.

This story was published originally on the insideclimatenews.org website and can be found here

David Hasemyer is a reporter at InsideClimate News. 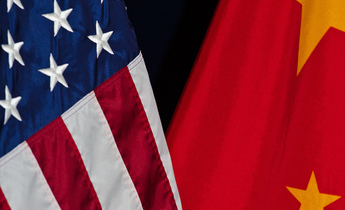 China and US agree to sign the Paris Agreement

The superpowers promise to steer investment flows away from carbon-intensive industry and pass the climate treaty “as soon as possible”, writes Li Ying 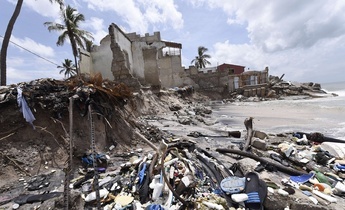 Sea-level rise 'could last twice as long as human history' 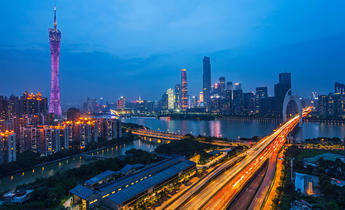 Chinese cities most at risk from rising sea levels

China's fast-growing coastal megacities could be swamped by rising oceans as a result of climate change, with 145 million people under threat, says a report from Climate Central 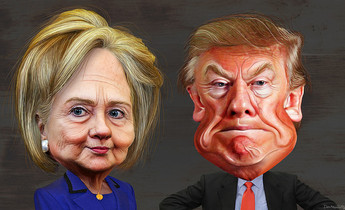 How do US presidential frontrunners Clinton and Trump stack up on the environment?

New York, Miami and Washington D.C. are having to upgrade flood protection systems to adapt to rising sea levels

From Miami to Washington DC, towns and cities on America’s east coast could see triple the number of tidal floods by 2030 as sea levels rise