As Brazil admits its deforestation rates are on the rise again, a study published in the journal Science highlights areas of high forest loss from around the world

Earth has lost more than half a million square miles of forest between 2000 and 2012. Analysis of 650,000 satellite images, published in the journal Science, reveal the extent of loss and recovery – Brazil’s success in the Amazon is offset by deforestation in Indonesia, Malaysia, Paraguay, Bolivia, Zambia and Angola.

The colour-coded maps below show changes from ten areas around the world: green is forest cover, red is lost forest, blue is forest gained and pink is forests both lost and gained in the period. 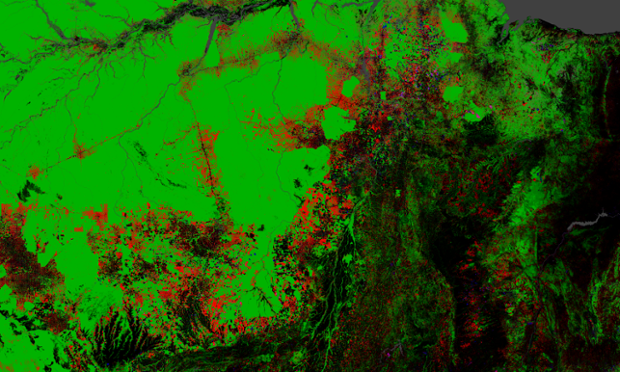 Brazil
Deforestation in the Amazon decreased between 2004 and 2012, but between August 2012 and July 2013 it increased by 28%. However, the deforestation, driven in part by loggers turning forest into ranch land for cattle, is still at its second lowest level ever. 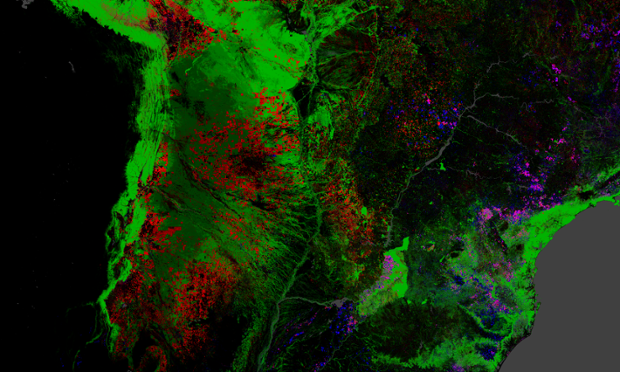 
The country (on the west in this photo) may not be well-known internationally as a deforestation hotspot. But its rainforests, which have been the focus of a UN scheme to reduce carbon emissions from deforestation, have been being chopped down at a frightening rate. The rate of deforestation increased by 4.4% between 2000 and 2005. Soya production and cattle ranchingare two of the main causes. 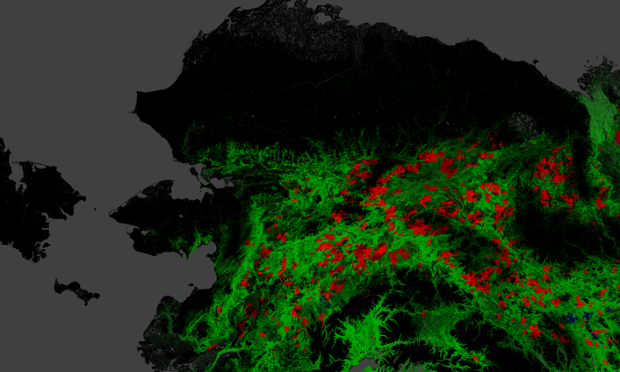 
The wildnerness of the Alaska interior region's coniferous forests glows bright red from above. 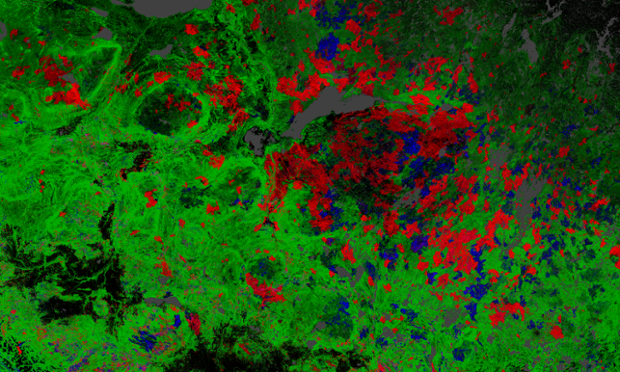 
Two-thirds of the country's boreal deforestation has taken place in the Saskatchewan province, as the bright red cluster here shows. Agriculture, mining and attendant road-building are the big causes. 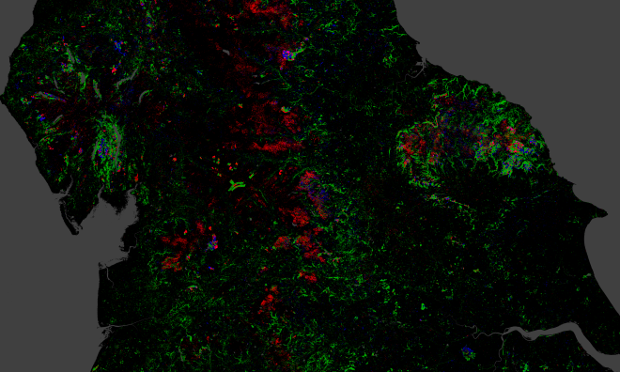 
Both Wales and Scotland have suffered deforestation between 2000 and 2012 – England has too, but less obviously so because it lost most of its forest cover many centuries ago – but it is notable that there are flashes of red even in national parks, such as the Yorkshire Dales. 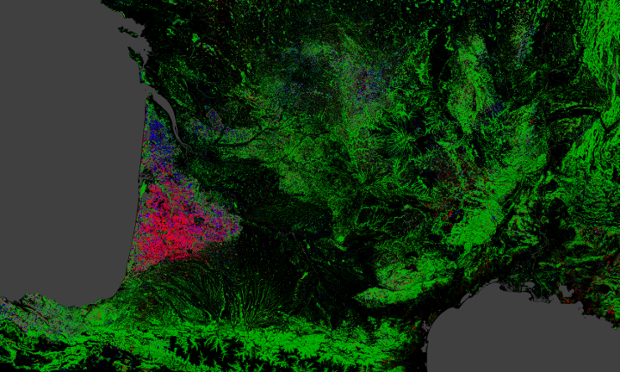 
Cyclone Klaus is largely to blame for destroying a huge swathe of the Landes forest, south of Bordeaux, which glows bright red here. The blue spots reflect replanting efforts. 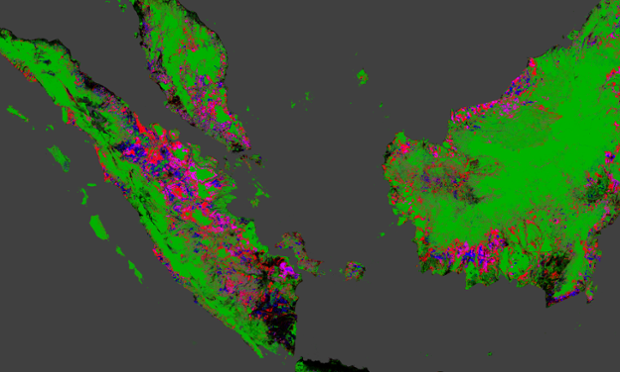 Indonesia
Perhaps the most infamous deforestation spot on the planet (lower left island on this map), despite a moratorium on the felling of rainforest, introduced in 2011. Palm oil plantations have largely been blamed for the country's deforestation – which has made the country one of the world's biggest carbon emitters. The country is losing around the same amount of forest as Brazil annually, despite being only a quarter of the size. 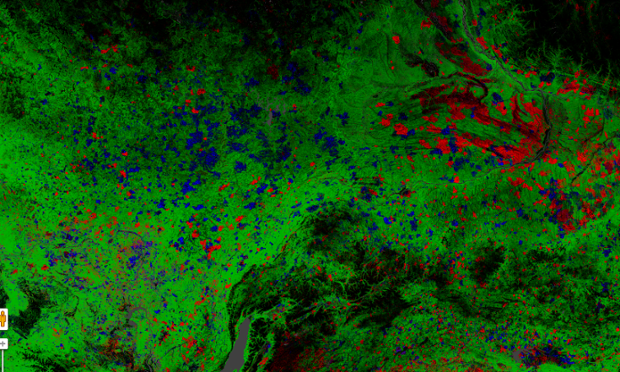 Russia
The Russian far east could be entirely logged by the end of the next decade, according to a study by the Beijing Forestry University. As these images show, there has been some substantial afforestation, too. 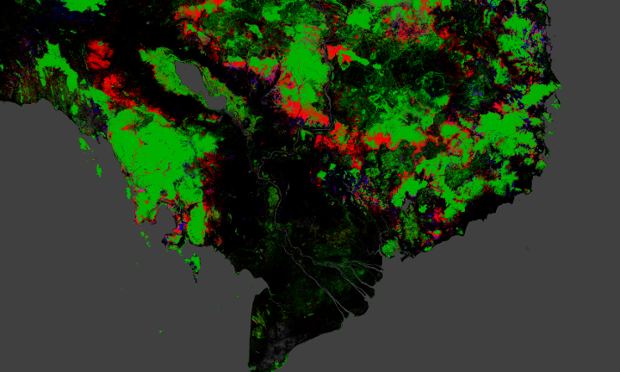 Cambodia and Vietnam
Both countries were highlighted in a report earlier this year as suffering a 'plague of deforestation', driven by illegal logging. 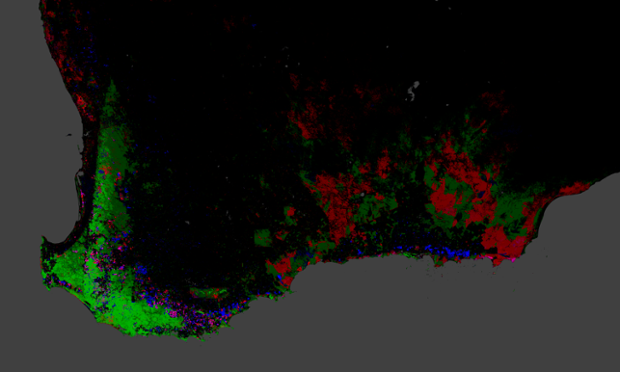 Australia
Western Australia was one of the first parts of the continent to lose its trees, in the nineteenth century, a trend that accelerated due to farming in the middle of the twentieth century, but there have still been deforestation hotspots this century.

Adam Vaughan is editor of environmentguardian.co.uk.

China's environmental impact in the Amazon

As the world's biggest buyer of illegal wood, China has been accused of fostering a billion-dollar trade which is destroying natural forests

Could China lead the race to save tropical forests?

An investigation by Global Witness has revealed how foreign companies are exploiting Congolese forests to feed Chinese demand for tropical hardwood. Researcher Colin Robertson spoke to chinadialogue from DRC.

What are the ecological costs of China’s future food imports?

China’s growing agribusinesses and demand for soybeans and meat is bringing intensive farming and the risk of further deforestation in Brazil and beyond. Tom Levitt reports.

To halve deforestation within a decade, a multibillion dollar injection is needed now, write Donald P Kanak and Andrew W Mitchell. As Durban draws to a close, they explain how it could be done.