Efforts to cut the amount of coal burned by China’s power industry could leave the country’s financial sector exposed, says a new report from Carbon Tracker

Recent signals suggest China is seeking to slow its domestic coal growth. One senior official has declared that a national carbon market can be expected in 2018, while comments from the chairman of China’s Advisory Committee on Climate Change sparked optimism that an absolute cap on carbon-dioxide emissions can be expected in China’s 13th Five-Year Plan, starting in 2016.

China has since attempted to distance itself from such a commitment. Nevertheless, this announcement, along with a host of energy and environmental policies, suggests future demand for coal in China’s power sector might not replicate the strong growth of the last 15 years.

Lower-than-expected demand would reduce the value of some of China’s coal assets, having knock-on effects on the companies that own them and the Shanghai, Shenzhen and Hong Kong Stock Exchanges on which they are listed. 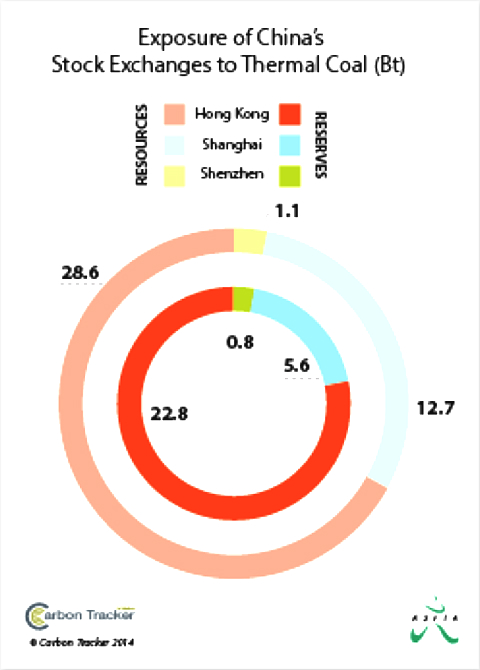 Unlike the mainland exchanges, Hong Kong also lists companies with thermal coal assets located outside of China, in Kazakhstan and Australia. This leaves it exposed to potential impacts on value resulting from policy changes and market conditions in countries in which China has no control.

China’s policymakers and financial regulators must get to grips with the implications for China’s financial system of the changing dynamics within the power sector. For the Hong Kong Stock Exchange, a significant loss in value would hinder its attractiveness to new investors and ability to compete on the global financial market, for example.

China’s capital markets should seek to reflect more closely the increasingly diversified nature of China’s power sources. Carbon Tracker recommends that enhanced disclosures are requested from listed coal companies on how their ongoing capital expenditure strategies – which totalled over US$21 billion collectively in 2013 – are justified in a structurally slowing coal sector. Carbon Tracker also sees the need for disclosures on the exposure of company thermal coal assets to the risk of falling demand.

These actions should form part of an effort to ensure China’s capital markets are resilient to the risks created by new energy policies.

Luke Sussams is a senior researcher at the Carbon Tracker Initiative. Keep up to date with Carbon Tracker’s work via Twitter at @carbonbubble.

What will the Chinese leadership say at the UN climate summit in New York?

Ban Ki-moon has called for “bold” announcements from national leaders at his climate change summit in New York this autumn. Greenpeace’s Li Shuo outlines a possible response from China

China can no longer hide away at climate negotiations