The EU this week again delayed a decision on whether to prohibit glyphosate, the world’s most widely-used herbicide. Nick Mole says a ban is long overdue

The herbicide glyphosate is currently embroiled in a huge amount of controversy in the European Union and globally about whether or not it should be approved for use across the 28 EU Member States – a decision that will be made later this week in Brussels.

Glyphosate was first used as an herbicide in the early 1970s after successfully being developed by the multinational agrochemical company Monsanto. Since then it has become the most widely used herbicide in the world and what has long been advertised as the safest. So safe that you can drink it, manufacturers claimed.

Whilst the main uses of glyphosate are as a herbicide in agriculture, its use has grown with the expansion of Genetically Modified (GM) crops. It is also used in non-agricultural settings for clearing streets and pavements of weeds often under the trade name ‘Roundup’ and is also widely used by amateur gardeners.

Concerns about the potential harmful effects of glyphosate on human health have been growing for many years. As long ago as the 1980s, industry studies showed that glyphosate could cause birth defects in laboratory animals.

a report on glyphosate published by the US Environmental Protection Agency (EPA) showed that glyphosate could be linked to cancer and other effects including kidney damage. These concerns appear to have been borne out in Argentina where unusually high instances of birth defects, cancers and kidney problems have been reported by farmworkers and their families in areas that are treated with high amounts of glyphosate as a result of GM soy production.

Despite protestations that it is safe coming from the manufacturers of glyphosate and other supporters in a range of governments around the world the controversy over glyphosate has refused to go away. In March 2015 the International Agency for Research on Cancer (IARC), part of the World Health Organisation classified glyphosate as a probable human carcinogen. In particular, they noted that there are very close links between exposure to glyphosate and the development of non-Hodgkin’s lymphoma.

For glyphosate in the EU, the announcement and classification from IARC could not have come at a worse time for the industry, as the authorisation for use in the EU is up for renewal at some point before June 2016.

An EU Parliament Committee was expected to vote on the re-licensing on May 19, and the health impacts of the compound were embroiled in further controversy after a scientific study released this week was criticised as flawed and subject to a conflict of interest.

Through the vote, the safety of glyphosate will be reassessed and a decision will likely be based on scientific evaluation of the potential intrinsic hazards of using glyphosate. Without approval, glyphosate cannot be used, sold or stored by anybody in any EU Member State.

There has for many years been growing public concern about glyphosate and other pesticides and just how much of them the public is exposed to in their daily lives.

In 2013 Friends of the Earth published

a study showing that 44% of those they tested across 18 EU countries had traces of glyphosate in their urine.

In the US, another study showed that glyphosate is not only apparent in urine but also in breast milk and blood samples.

testing of the urine of members of the European Parliament, timed to coincide with the decision on whether or not to approve glyphosate, 100% of those tested had glyphosate present in their urine.

This is hardly surprising as glyphosate regularly turns up as a residue in the food that we eat, particularly in bread and wheat based products as a Pesticide Action Network UK report clearly showed in 2014.

Food is just one of the many routes of exposure that people have to glyphosate and it is causing huge concern amongst the public across the EU. This concern has been reflected in
public polls that are showing that as many as two thirds of the EU public are opposed to the use of glyphosate.

So what was first thought to be an exercise in rubber stamping for glyphosate in March of 2016, whereby it would be reapproved for a further 15 years in the EU with no changes to the way in which it is used, has turned into a nightmare for those that support it.

The original decision was set to happen in March 2016 but opposition to the reauthorisation from some EU Member States, including France, the Netherlands and Germany meant that the EU Commission could not be certain that they would achieve the required majority vote to allow its reauthorisation.

Due to this the vote was postponed and rescheduled for this week. This delay and the concern aired by some Member States led the European Parliament to take an interest in the issue, and on April 13 they agreed a motion stating their position on glyphosate.

Whilst not calling for a complete ban, it set out what would be major changes to the authorisation of the herbicide.

Included was a ban on the sale of glyphosate to the public, restrictions on the use of glyphosate in public areas and a shorter period of authorisation from 15 years to seven.

Whilst the Parliament motion is in no way binding on the European Commission and the decision that MEPs will take would clearly show that the will of the citizens of the EU is against the use of glyphosate as it is currently set out.

Any authorisation that does not include those measures set out by the Parliament would in effect be undermining the democratic process of the EU as a whole.

It is difficult to predict what the outcome of the vote will be.

The EU Commission has had to come up with a new proposal for glyphosate, which has not been made public, and several Member States are still opposed to it being approved. France in particular has said that regardless of how the vote goes, they will ban the use of glyphosate throughout France.

There is also a growing movement across the EU of towns and cities that are banning the use of glyphosate and other pesticides due to concerns about harmful human and environmental effects from it. France has over 400 pesticide-free towns and cities including Paris. Recently several places in Spain have banned the use of glyphosate, including Barcelona. This trend is set to continue growing.

In terms of what would happen if there is a ban on glyphosate in the EU it would have global ramifications. Those wishing to import products to the EU would have to ensure that there are no detectable residues of glyphosate on their produce.

With other pesticides that have been banned is has led to a move away from their use to ensure that exports can continue. It would also have serious implications for the development of GM crops. Glyphosate is intrinsically tied up with these, and the various 'Roundup-ready' crops that are grown around the world, notably in North and South America.

But all is still to play for and will become clearer this week. But whatever happens, it is clear that the public no longer want glyphosate, and that pesticides in general are viewed with healthy suspicion.

It is time to move away from the chemical heavy agriculture of old and look towards real innovation in agriculture. Its also time to stop using the post-war arsenal of toxic chemicals and look to working with nature, rather than trying to tame it and beat it into submission.

Editors note - On May 19 the European Parliament's Environment Committee voted once again to postpone a decision. Without a further vote, Glyphosate's licence for use in the EU will expire at the end of June

Nick Mole is UK and European Programme Co-ordinator for the Pesticide Action Network. 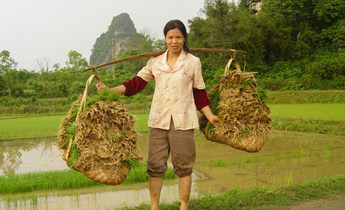 Organic farming systems, when done right, can come close to matching the productivity of conventional systems

What's the next Silent Spring?

If Rachel Carson, author of the groundbreaking expose on pesticides, were alive today, what environmental crisis would she expose?

GM crops blamed for rise in "superweeds" in US

Genetically modified (GM) food crops are being blamed for a growing weed-resistance epidemic in the US as experts urge return of traditional crop rotation and diversity.

The plethora of chemicals farmers apply to their fields in the UK would surprise everyone, says pollination expert Dave Goulson

After reports of pesticide residue in traditional Chinese herbs, Greenpeace has profiled three farmers, highlighting the low-level of awareness of health risks