Filmmaker Jo Ruxton is the producer of A Plastic Ocean, a documentary released last year to highlight the devastating impact of global plastic pollution on marine environments and the threat it poses to human health.

Ruxton worked for WWF and the BBC before co-founding the non-profit group Plastic Oceans, which works to raise awareness of the harm done by our addiction to plastic – and the urgent importance of curbing it. 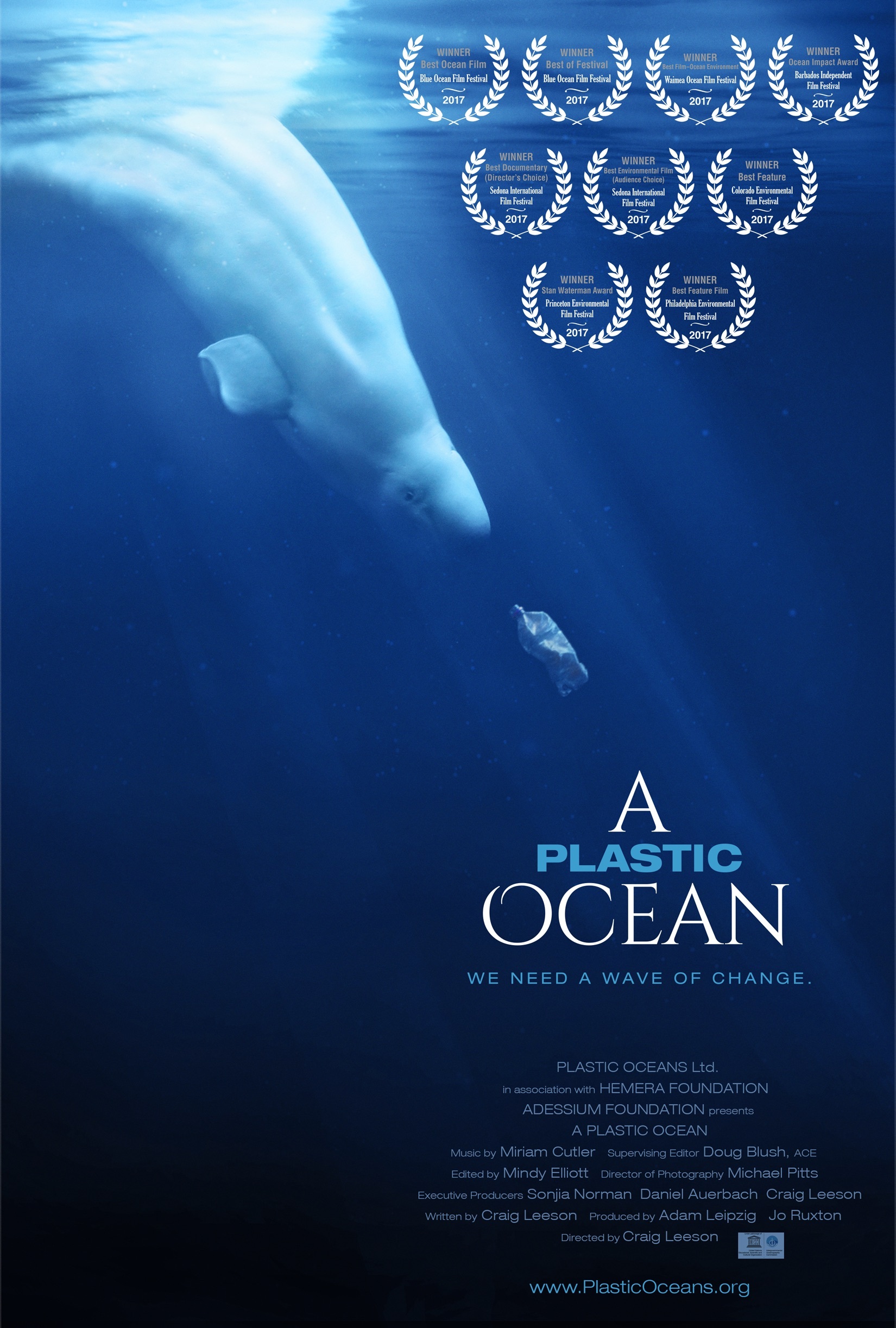 chinadialogue (CD): Why are so many of us only just waking up to this problem?

Jo Ruxton (JR): I think because we’ve grown up assuming plastic was disposable, and we’ve never questioned the fact it is indestructible. It’s just been part of our lives. And because it’s been a gradual process you start to accept it – you go to beaches, you expect to find plastic on them. The other thing is the science about the chemicals that attach to plastic and leach from it is all quite new.

CD: Why should this matter to people everywhere, not just those who live near the sea?

JR: It doesn’t matter if you’re in midwest America, every second breath you take has been provided by the ocean. If the oceans get sick, then anything that breathes oxygen is in trouble.

Global plastic production now is more than 300 million tonnes, half of which is for single use. The estimate that goes into the oceans every year is eight million tonnes, which is the equivalent to global plastic production in 1961. Can you imagine 50 years down the line if we’re letting 300 million tonnes go in? Is it going to affect the absorption of carbon dioxide, or the ability to produce oxygen? Because that’s what the oceans do for us. Apart from driving our weather systems, providing us with food, leisure, transport and everything else.

Then there’s the human health side, which I hadn’t even imagined when I first started making the film. These chemicals, which get into the food chain have been linked to infertility, to cancer, to autoimmune problems, to endocrine disruption, to behavioural problems in the growing child, to foetal development problems. Surely, even people like Trump are going to care about that.

CD: Your film shows a very different view of the oceans than we normally see on TV – are other media getting it wrong?

JR: Nature documentaries often portray the oceans as if they’re full of life and pristine and I think give a very skewed view.

It’s one of the reasons I left the BBC. I worked in the natural history unit for 12 years. And I found it quite frustrating because we were always showing everything as if it was fine. I worked on quite a few shark documentaries and always wanted to get something in about the decimation of shark populations. But it always came down to the fact that people want to be entertained, they don’t want bad news.

I think we have an obligation to tell it how it is. The more we show everything to be fine, the more people are going to assume it is and carry on behaving the way they do.

CD: Like failing to recycle? Why are recycling rates so low?

JR: I think because we’re lazy; because it’s inconvenient. And I have to say, before we had curbside recycling where I live I would put my plastic together to drive to the dump, but if I was late for work and the bin men were outside and I could just as quickly shove that out and get it out of my kitchen, I would do it. I wouldn’t dream of it now. But I wouldn’t dream of it now because I know what I know and I’ve seen what I’ve seen. Most people don’t think about it.

CD: How much responsibility do the plastics producers have? Chinese oil giant Sinopec features in the film, for example, following a major spill of its plastic pellets off the coast of Hong Kong.

JR: I think they can play a huge role. But I don’t see them as the enemy. Because all of us use plastic. I’m looking around my desk now. I have a plastic container for my business cards, I’ve got my mouse, my phone, plastic covering on my chair. It wouldn’t be fair to point fingers at the people who are producing the pellets.

What we’ve got to do is make people realise that this so-called convenience of single use is what’s wrong. Once you get into your head that plastic’s not disposable, there are so many changes you can make. Use solid soap instead of buying a liquid plastic bottle. Use butter that’s wrapped in paper – you don’t need a new butter dish every time. If you don’t like the taste of your tap water, then filter it. Go back to fountain pens. Stop using straws, for heaven’s sake.

CD: What about the mess we’ve already made? Do the


ideas for cleaning up the ocean have any merit?

JR: I don’t know how you clean up [the surface] without removing the life-giving plankton. Also, more than half of the plastic sinks and we don’t know enough about the bottom of the ocean to start hoovering it up. So much life upwells from the bottom of the ocean that supports the rest of it. Lantern fish have the biggest biomass in the ocean; they’re about 60% of the ocean. Every night they migrate from the sea bed up to the surface, so they’re bringing stuff up from the bottom and they’re feeding at the surface and taking it down. What else might we take?

Beach clean-ups help – if the plastic is sorted and disposed of properly. We had one in Hong Kong and the council wouldn’t come and collect it because it wasn’t their collecting day and then there was a typhoon and it was all straight back in the sea.

CD: And a lot of washed out plastic ends up getting eaten by animals – the fact 90% of seabirds have eaten plastic stood out as a statistic from your film. How do we protect them?

JR: It’s not just animals in the ocean. I was in Dubai and I met a vet who showed me pictures of camels that roam across the desert, eating whatever they can, and he reckons about 40% of them are getting massive bulbouses in their stomachs. He showed me a necropsy of one and it was compacted plastic in a big ball that was about a metre wide.

Olivia Boyd is a journalist and editor based in London. 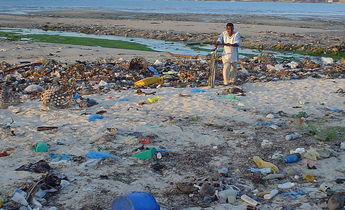 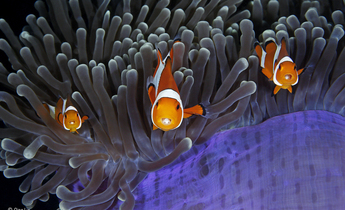 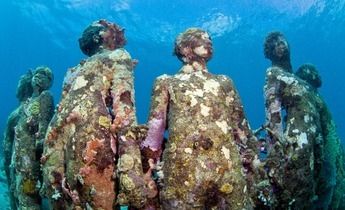 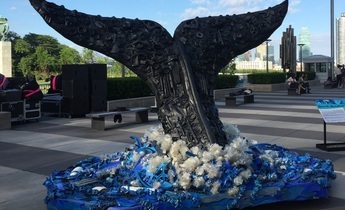 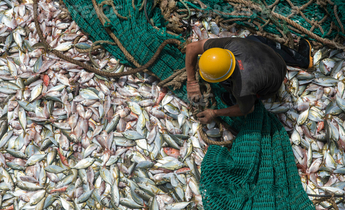 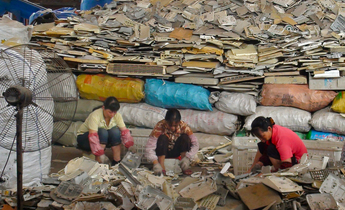