China’s forests in Hunan and Sichuan are the richest of their kind in the world. Conserving them is an international responsibility, says WWF’s Eric Dinerstein

The Kingdom of Rarities
By Eric Dinerstein
Island Press, 2013

As lead scientist for WWF, Eric Dinerstein has travelled the globe in his studies of biodiversity. The Kingdom of Rarities, his new book, focuses on the rarest of the planet’s 1.5 million named species to make a case for conservation. In a conversation with chinadialogue's Corinne Purtill, Dinerstein explains why focusing on a few rare species could potentially save even more.
Corinne Purtill: How do you define rare?

Corinne Purtill is a former associate editor (US) of chinadialogue.

Research shows China isn't the main problem in the illegal rhino trade, but may be the solution

Tigers on "path to extinction"

Increased poaching, habitat destruction and poor conservation efforts by governments are leading the world's wild tigers down a "catastrophic" path to extinction, a new report has said.

Conservation world needs to broaden focus to help understand what species are out there, says Robert May 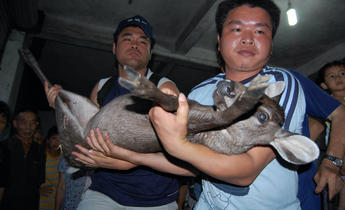 Cantonese appetites are gobbling up endangered species including the pangolin, giant salamander, wild snakes and owls – facilitated by lax policing and a belief in medicinal benefits.

Scientists say desertification of the high-altitude meadows is accelerating climate change and will have a profound impact on the area. Jonathan Watts talks with nomads who’ve seen changes right below their feet.