A dominant theme of the climate change debate has long been that of consensus. Politicians can’t agree and scientists don’t know for sure, we’re told by doom-mongers and Merchants of Doubt alike, and this is a problem for taking action on climate change. In response, many in science and public policy seem to invest their time searching for ever more elaborate ways to express a sense of unity. At best they creep towards consensus. At worst, frustrated dissenters fall out to ever-more noticeable forms of scepticism and disagreement, or groups settle on bland, sometimes even inaccurate, agreements.

But, with her new book Negotiating Climate Change, Amanda Machin offers a fresh call for disunity, robustly unravelling the idea that climate change is one process, for which there are simple ‘rational’ outcomes. Rather, we should celebrate disagreement, and put it to work for us in building actions (note the plural) on climate change. Precisely because it is such a massive, global problem, we must acknowledge, even be proud of our human heterogeneity; and use it to our advantage.

The book starts with a discussion of what Machin calls the techno-economic approach, and outlines the ways in which this is both limited and limiting. Machin stresses that the role of science in public policy can be more about opening options than giving singular programmes for action. She also unpacks the idea that technologies offer simple easy solutions, and expresses cynicism over the economic turn in climate policy which has characterised a lot of activity since the publication of the Stern Review in 2006.

For all that I identify with much of this, I don’t agree that these three strands should necessarily be conflated. It is true that forms of science and technological determinism often go alongside rather limited economic policies as part of TINA ‘there is no alternative’ rhetoric. But it does not have to be so hegemonic. Technological determinism can be utilised to a range of ideological ends.

Similarly, I agree with Machin’s later arguments that ideas of emergency can be applied as a limiting discourse, i.e. the sense that  ‘we must act now’ is utilised to narrow our thinking to particular routes. But I only agree up to a point. As with a few times in the book, I wondered if Machin had just been talking to the wrong environmentalists.

Another chapter unpicks the idea of ethics as a basis for action on climate change. By assuming we agree on what is ethical, such approaches can suppress difference and in doing so act to suppress marginalised views; ultimately serving the status quo and limiting us from searching for new ideas.

Machin further argues that both the ethical and the techno-economic frames seem, in practice, to expect us to work individualistically, rather than collectively. She identifies a similar problem of an assumed common good infecting community-based approaches; the rhetoric of community is often used as a way to bypass state action and ultimately atomise us.

Again, part of me was inclined to agree, but again I felt she was missing something and that projects do not always run along such lines.

The 10:10 campaign comes under particular criticism. This began in 2009 and promoted the power of individual pledges to make a 10% cut in personal carbon emissions. As such, it is a very good example of the problem of atomised calls to individual action. She quotes Andrew Dobson in saying the campaign was “about changing lightbulbs instead of changing society” to stress how piecemeal and unambitious it really was.

I agree with this assessment. But again, up to a point. What about the more recent iterations of 10:10 which put a focus on connecting people? She might also have explored the way the fracking industry is playing up the idea of community benefits (as opposed to community ownership). What about transition towns? (including how they can differ).

Above all, I expected the book to have taken more time to explore the silencing of race and class differences within the environmental movement (e.g. when an activist was told “we aren’t prepared for people to realise they’re racist at Power Shift”). More about the developing world would have been good too. Indeed an application of the UK-based Institute for Development’s STEPS manifesto – which places particular emphasis on the social context of technologies and focuses on multiple ‘pathways’ over more ‘motorway’ big ideas for the future - would have greatly improved the discussion of techno-scientific determinism and fitted the general thread of plurality.

Overall, although I recommend this book and enjoyed much of its philosophy, it stinks of having been written from a desk. If sociologists want to be taken seriously, they need to show more evidence of having spent time in the society they profess to talk about. When Machin argues that “we cannot rely on a philosopher-king to flourish a green standard” I want to stand up and applaud. But that’s also why I wish the book wasn’t so littered by their names.

I agree with Machin in her call to celebrate disagreement more in climate change debate. But we don’t need a citation to Habermas to do that. If you really want to celebrate the diversity of people involved in talking about climate change then do so by engaging with their stories. Don’t just pass down words from ivory towers.

Climate fiction: birth of a genre 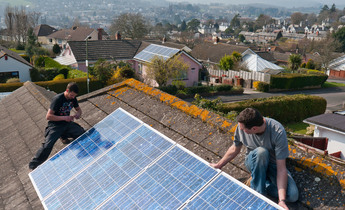