The name of China is almost obscured by a grey smudge on the title page of The People’s Republic of Chemicals, and this image proves to be apt.  This book examines the crisis caused by toxic smogs that periodically choke vast regions of China and the massive particulate clouds that drift far beyond the country’s borders. 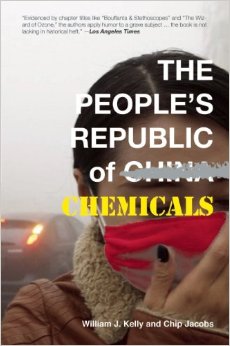 Authors William J. Kelly and Chip Jacobs joined forces once before in order to write their climate classic, Smogtown: the Lung Burning History of Pollution in Los Angeles, a remarkable 2008 exposé and memoir about air quality, politics and health in Southern California’s smog belt. This time, the duo of self-described “smog gumshoes from Los Angeles” go farther afield to investigate air pollution that threatens to put a chokehold on the Pacific Rim. What’s more, Mandarin editions of both books will be available through the Central Party School Publishing House.

No doubt the translators were challenged to render some of the exaggerated gonzo phrases and slang from this “murky yarn of atmospheric pain and karma” into prose that doesn’t come across as glib or simply baffling.

“Ashtray-skied towns” abound and burning coal “cruds its troposphere like cigar smoke in a closet.”  Beijing is described as “the city where your oxygen sometimes came spiced with black char.” A chapter entitled “Tweets for the Wheezy” notes that “a Twitter account had economic superpowers throwing each other the stink eye.” It goes on to describe how the US Embassy in Beijing inadvertently raised a ruckus in 2009 and 2010 by posting hourly readings of particulate pollution as measured on the roof of their former compound. Intended as a service for American travellers and embassy staff, the air quality statistics appeared on @BeijingAir, an embassy-run twitter page, and showed that the capital’s atmosphere frequently was less healthy than the official daily averages posted by China’s Environmental Protection Bureau would indicate. Chinese officials took umbrage and tried to block the public’s access to these damning numbers.  It’s obvious that Kelly and Jacobs are relentless researchers, and they don’t hide a heavy reliance on secondary sources. They readily confide: “We Googled until our fingers tingled. Then we gasped.”

Hypercharged patter aside, the writers do know their stuff. Kelly and Jacobs delve behind the headlines and grim statistics of coal emissions and cancer village mortality to focus on the latest struggles to prevent thousands of needless deaths per day from China’s poisoned environment. The authors insist that this dismayingly high death toll of 1.2 million premature deaths per year-- caused by cardiovascular disease, respiratory ailments and virulent cancers of the liver, bone, lung, breast and blood-- could have been avoided. They argue that these deaths should be counted as casualties of China’s overly rapid economic revival. And the multinational corporations who have outsourced manufacturing jobs on such a vast scale must be considered complicit. After some 300 million Chinese people moved out of poverty, the rising middle class now demands a better quality of life.  Or at least better air to breathe.  Sustainable or renewable alternatives are the way of the future, and China is set to lead much of the research and development.

Solutions won’t come easily. Although Beijing recently announced a ban on all coal use in the capital by 2020, China’s existing coal plants are due to spew out carbon pollution elsewhere for decades to come. Because government plans for reducing air pollution may not yield the desired effect, they have grave implications for the rest of the world. Relocating coal plants inland coal gasification plants have been green lighted in order to transform abundant Chinese coal into cleaner-burning synthetic gas or liquid fuels. But syngas has nearly double the carbon footprint of coal and the process is water-intensive. In western China, where many of these megaplants are due to be built, water shortages already are a serious problem.

“A nation breathes its choices,” the authors warn, while admitting that “when it involves the People’s Republic and coal, it’s more than complicated. It’s ancient.” The book examines some of that history. It traces the region’s coal dependence back to the weapon mongers who outfitted the army of Emperor Qin Shi Huang with chrome-plated swords and fearsome tools of war while “vapours of metals, hydrocarbons, carbon monoxide, nitrogen oxides –the stuff of air pollution today—shrouded China’s cities on still winter days.”

Kelly and Jacobs had figured that Southern California’s air pollution solutions could be very relevant to present-day China. Like Beijing in 2008, Los Angeles had been highly motivated to clean up its notoriously filthy air for the 1984 Summer Olympics. The technology of understanding air pollution had advanced and some pitfalls might be avoided. The authors advocate the cooperation of scientists to understand the chemistry of pollution, coupled with regulating very powerful and polluting industries, whether local or multinational.

A travel grant from the Society of Environmental Journalists funded Kelly’s first-hand research in China, which ranged from Qufu, Anhui and Jiangsu to Shanxi province and included a stay in Beijing. Drolly referred to as “Greyjing”, the Chinese megalopolis triggers flashbacks to the 1960s Southern California smogscape of the authors’ childhoods: “the dreariness, the silent casualties, the incessant blame mongering, the madness of a sunless existence.”  A former spokesperson for California’s South Coast air quality management district, Kelly is more familiar with the alphabet soup of environmental regulatory agencies than most journalists. He breaks down the acronyms and the anodyne bureaucratese to raise concerns and uncovers the misuse of statistics meant to confuse the public.  Chip Jacobs, an investigative reporter with a similar penchant for vivid imagery, highlights quirky personalities and hidden motives in the unfolding saga of climate change. Politics loom large. The book is simultaneously entertaining and alarming, and doesn’t spare officials from criticism.

“The raccoon eyed, chain-smoking Deng [Xiaoping] never uttered a public word about smog,” the authors point out. Instead, the leader urged citizens to “Be brave. Walk with faster steps,” despite the murky skies overhead. In a “Faustian bargain [to industrialise and modernise] contoured by Deng and perpetuated by Jiang and his likeminded successors, China would “shape shift into an export-manufacturing colossus dedicated to Western store shelves.”

US President Bill Clinton also emerges as an eco-villain. Although Clinton championed environmentalism in the United States, Kelly and Jacobs note how the bilateral trade deals made during his administration got the American consumers hooked on inexpensive Chinese goods. Prices were kept abnormally low because of China’s cheap but dirty energy sources and sweatshop wages paid to labourers. But exporting dirty manufacturing to China could not outsource pollution indefinitely, particularly when antiquated or wasteful methods were used there without modern filters. Regrettably, no provisions prevented China from financing highly contaminating coal-based projects.

“In post-W.T.O. China, something biologically creepy was only a factory pipe away,” the authors observe. They conclude that ultimately, the world cannot escape the consequences of carbon gluttony on its climate. Kelly and Jacobs urge President Xi Jinping “to make eco-restoration as much his legacy as ridding the party of the endemic graft he so loathes.”

Children are particularly vulnerable to the effects of China’s severe air pollution, but there's disagreement about how to look after them

Speaking out against air pollution through "smog art”

Residents have been finding creative ways to speak out publicly against air pollution, including smog-versions of popular songs and placing masks on statues in Beijing

A prayer for clear air