Beijingers enjoyed a rare breath of fresh air this week. The city’s smog levels fell to their lowest levels in recent years, as authorities scrambled to shut down factories and curb car use so that China’s Second World War victory military parade had a pollution-free backdrop.

But the blue skies will likely dissipate once the celebrations are over and cars go back on the roads, construction work restarts and factories resume production.

With China’s chronic smog in mind, Dutch architect Daan Roosegaarde has come up with an innovative solution he says will help cities such as Beijing clean up toxic air and harmful pollutants.

His team of designers has created The Smog Free Tower, intended to be the 'largest purifier in the world.'

The 7-metre unit will use ionic filters to charge and remove smog particles by blowing fresh air out of the tower's side vents. This will create a high-pressure zone – 'bubbles' of air, which will be 75% cleaner than the rest of the city.

The Dutch designers have raised money on crowd-sourcing website Kickstarter to make the tower a reality and an opening ceremony for the first model will be held in their home city of Rotterdam in the first week of September.

The technology is similar to that used in hospitals. “In a few hours it will clean (air) in a small space; if you leave it on for a couple of days it cleans a small neighbourhood” Roosegaarde  says.

It is also highly energy efficient, using about 14,000 kilowatts of power – less than a kettle, Roosegaarde told chinadialogue.  In Rotterdam the tower will be powered by wind energy, while elsewhere he hopes it will run on solar-generated electricity.

If enough funds are raised, the plan is to take the tower on a tour of smog-choked cities around the world - including Beijing, New Delhi, Paris, Los Angeles and Mexico City.

Made out of strong durable steel, the tower can be shipped and set up in a matter of days.

The idea came to Roosegaarde on a trip to smoggy Beijing, which he hopes will be one of the first stops on the tower’s world tour. The Beijing health department has sent a delegation to visit the opening ceremony in Rotterdam on September 5, and the Dutch department of science and technology has signed a Memorandum of Understanding with the Beijing city government on possible future use of the tower.

“The fact that Beijing won the 2022 Winter Olympic Games gives it the incentive and we are the first answer,” Roosegaarde says.

Companies are trying to cash in on the Chinese public’s growing demand for clean air as thick choking smog blocks out the sun and wreaks a heavy toll on public health.

A recent study claimed that poor air quality could be responsible for up to 2 million premature deaths a year in China, while the documentary Under The Dome examined the impacts of air pollution in Chinese cities and its causes, garnering hundreds of millions of clicks.

Sales of air filters have soared amid public health fears and a diverse market of anti-pollution products, ranges from simple face masks and smog-sponging household plants to highly-elaborate filtration technologies or even completely pollution-proof offices and homes.

In 2013, consumers on China’s biggest online e-commerce site, Taobao, spent 870 million yuan (US$140 million) on anti-smog goods such as face masks and air purifiers, and the figure is likely to have risen last year as consumers became increasingly aware of the harm caused by bad air.

Many small-scale innovations aimed at solving the pollution problem can, at first glance, appear as gimmick-driven attempts to cash in on China’s environmental crisis. Or such technologies can look hopelessly inadequate given the scale of the problem. China’s leaders face a huge task in reversing pollution after half a century of heavily-industrialised economic development has spoiled air, water and soil in many parts of the country. 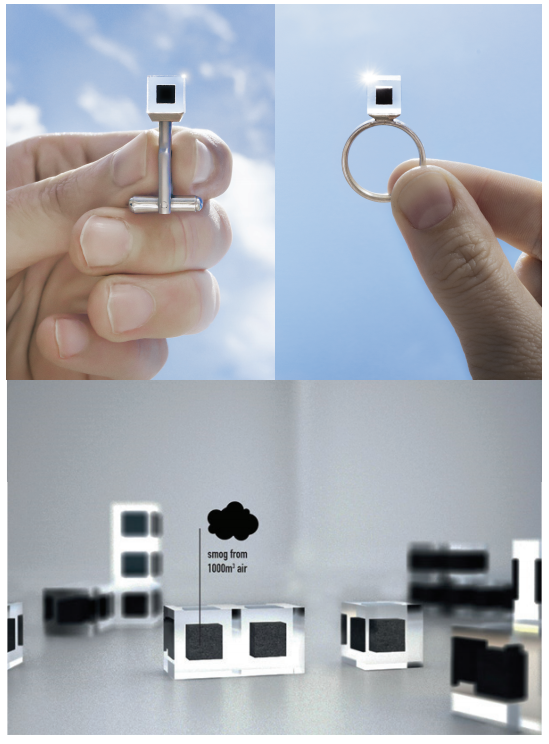 The tower isn’t a magic bullet, Roosegaarde agrees, but he hopes it will create a “space where NGOs, clean tech companies, governments, neighbours will come together to decide how to clean up the city – one that combines high tech with creative thinking.”

The project is even more idiosyncratic than its first appears. The harvested smog will be compressed into cubes that will be used to make quirky jewellery. Roosegaarde hopes the cubes of black smog will become popular engagement rings – a distinctive token of love and at the same time a signal to take action on improving the environment.

Architects have a major responsibility to deploy their passion and expertise to create low carbon cities, Roosegaarde says. “Architecture used to make wild statements about the future of the city. Now architects seem completely disconnected from how cities are created,” he says.

“Everyone knows the answers already: electric cars, clean energy, local printing to reducing transportation. But the real problem is how we get there” says Roosegaarde. “The smog free tower is a bridge to the solution.”

Roosegaarde’s previous projects have also aimed to change the way people interact with the environment: smart highways that glow in the dark, harvest energy and adapt to differing traffic situations; and a sustainable nightclub floor that generates energy when people dance.

That's impossible!!!! if this is possible, then no need to control pollution at all, and human can cut all trees! That's totally against common sense!!!

Beth Walker is chinadialogue’s culture editor. She is also editor of thethirdpole.net. She has researched and written about Asia’s international rivers for many years, and has lived and worked in Yunnan province. She studied Chinese at Oxford University and Development Management at the London School of Economics. You can follow her on Twitter at @beth_wa

Air pollution levels in most of China's cities fell during the first half of 2015, Greenpeace said, most notably for measurements of extremely toxic PM2.5