“Fuxin was founded because of coal, it flourished because of coal, it was one of the first centres of energy production set up by the People’s Republic. To develop the nation we tried to be number one, to mine more coal. Now, we’re the first resource-depleted city,” says Yang Zhonglin, Fuxin city’s deputy Party secretary and mayor from 2003 - 2016.

Over the last fifty years Fuxin has provided China with 700 million tonnes of coal and 250 billion kilowatt hours of electricity. But the city, which was founded and flourished because of coal and coal power, is struggling as the coal runs out.

In this photo essay, Stam Lee explores Fuxin, China’s first resource-drained city. As the coal economy fails, the city is pinning its hopes of revival on wind power. 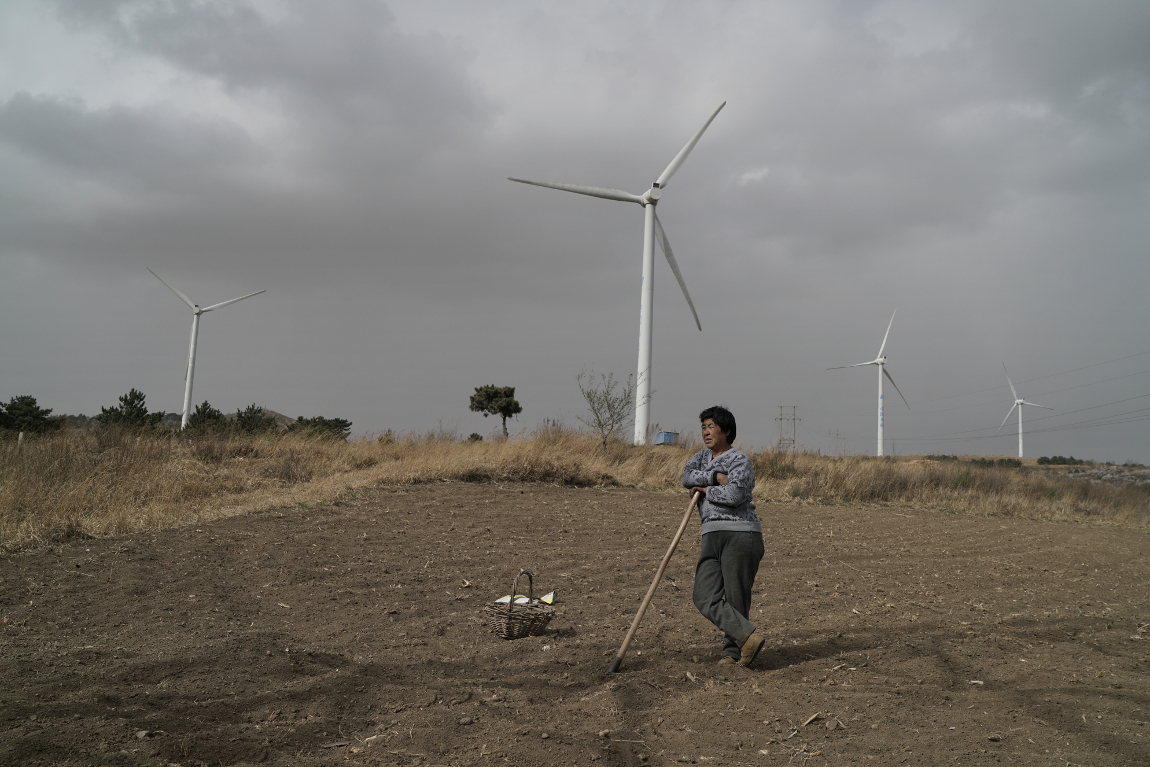 Up on the hill you can hear the new turbines spinning in the strong breeze. Chen Fang, from the village of Taizigou, hopes the wind will bring rain so she can plant her seeds.​ 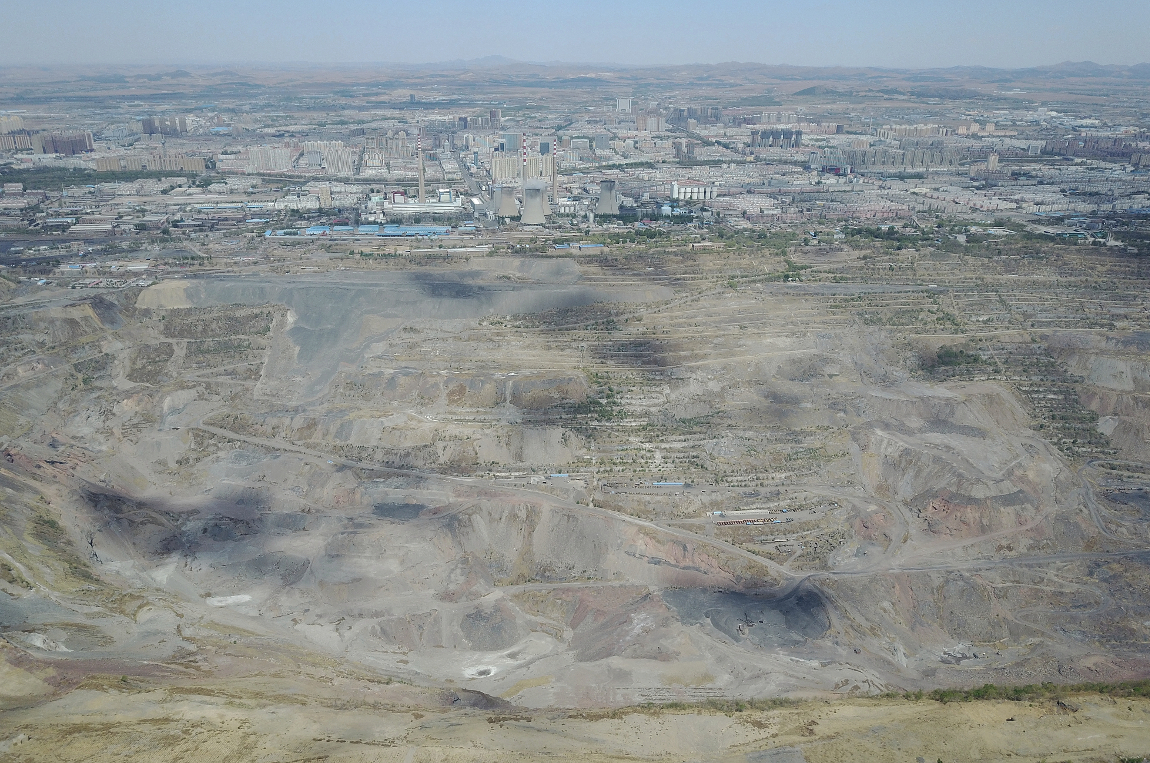 The Fuxin Haizhou Open-cast Mine, allegedly Asia’s largest open cast mine, was once the pride of the people of Fuxin. Despite being closed for many years, small fires can still be seen along in the 6-kilometre pit, spontaneously igniting in the coal layer. On December 28, 2001, Fuxin was officially designated as a resource-drained city by the State Council – the first such city. 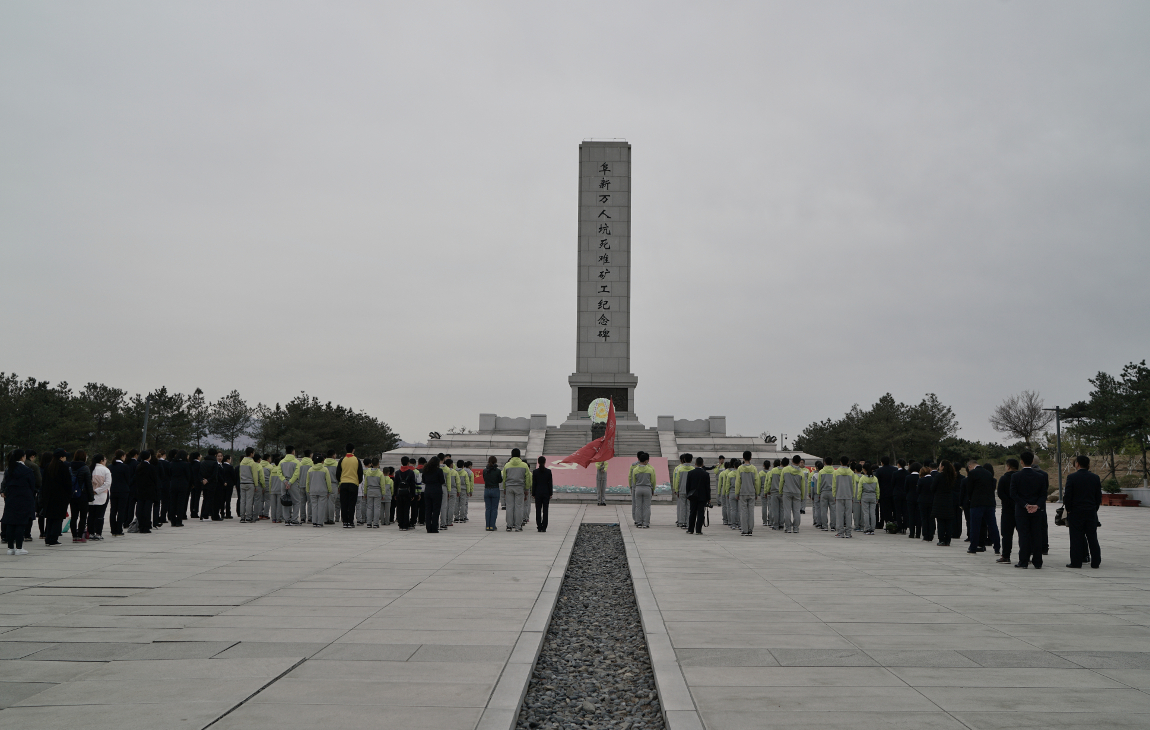 Locals and tourists come in a steady stream to visit a memorial to coal miners who died in the mines between 1914 and 1946. Fuxin was founded and flourished on the coal economy, and was one of the first centres of energy production set up by the People’s Republic of China. 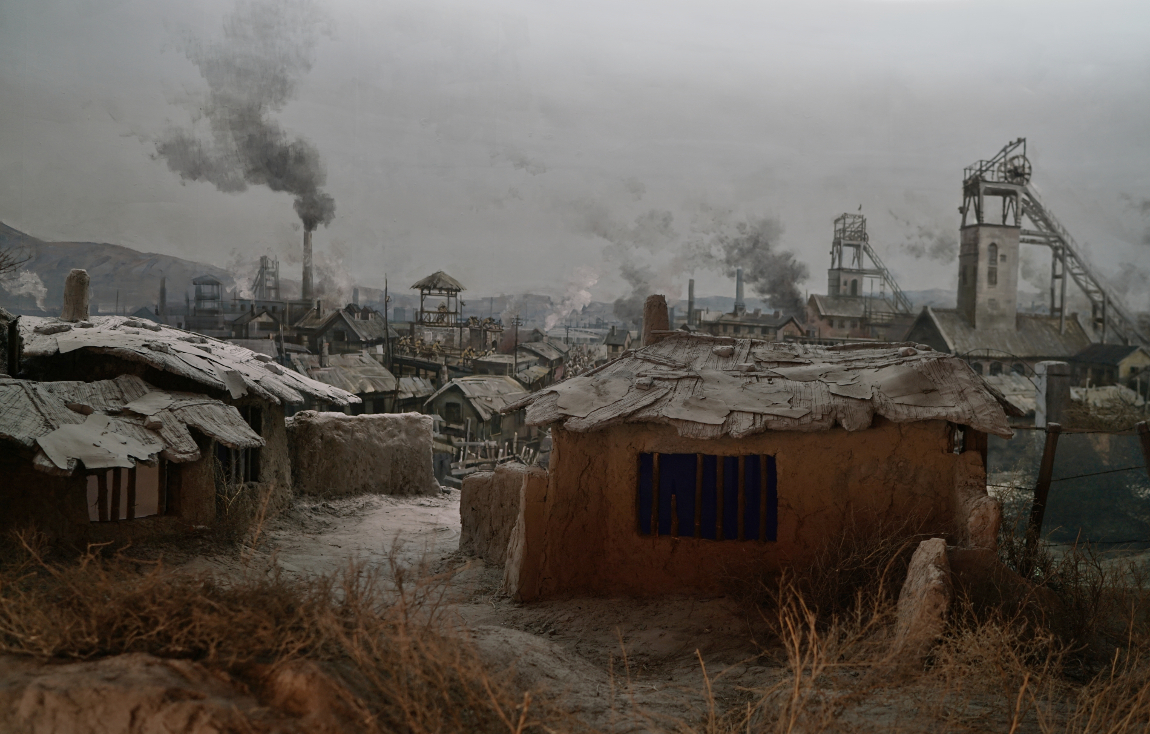 A model of the old mining area in the mining museum. In over half a century, 530 million tonnes of coal were extracted in Fuxin – loaded into 60-tonne trucks that cumulatively would circle the globe 4.3 times. 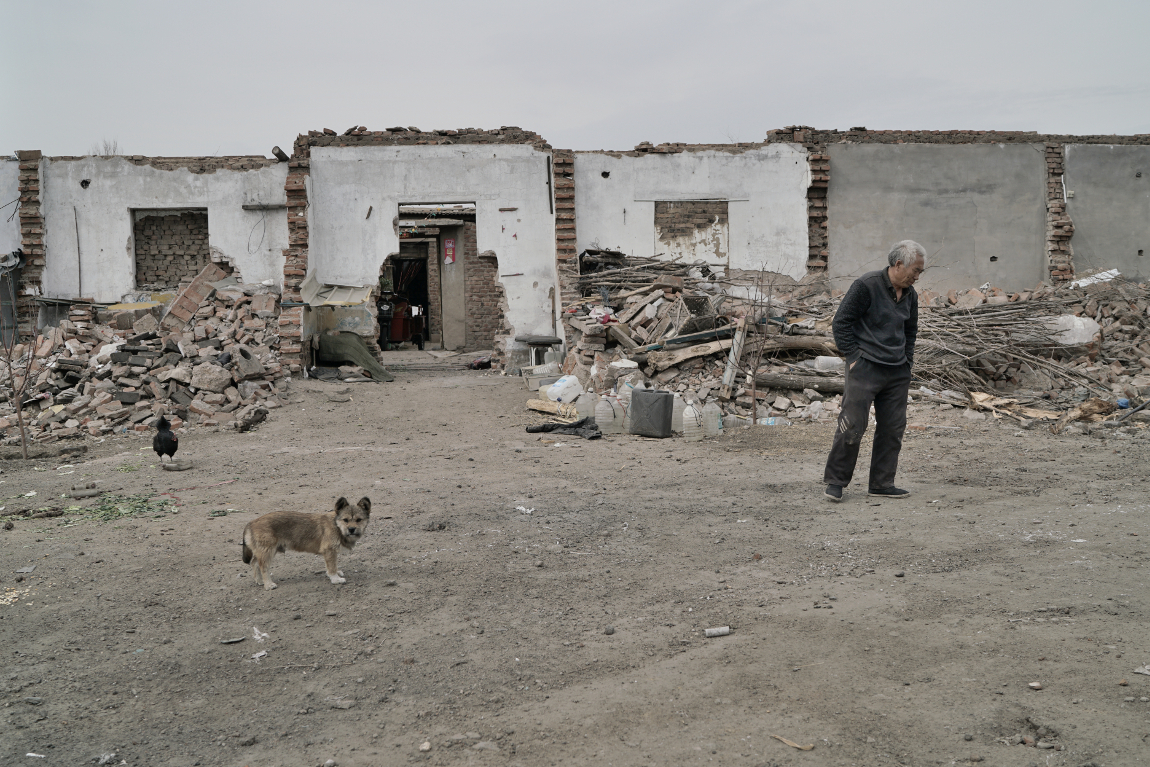 In the old mining villages near the pits you can still find some former miners living there. Huang Anyuan is one of them. He worked in the mines for 30 years before retiring. Five years ago the government offered him new accommodation available to those affected by subsidence but he gave this to his son while he and his wife stayed put. 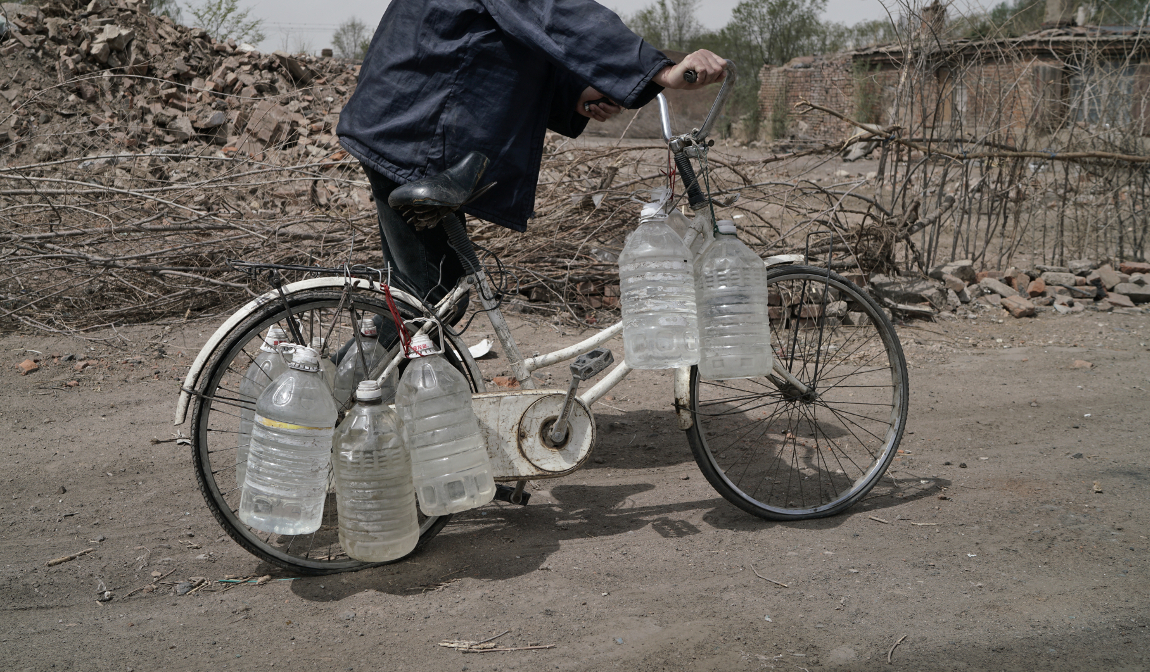 Most of the buildings nearby were demolished last year. The water’s been cut-off so people have to fetch it themselves. 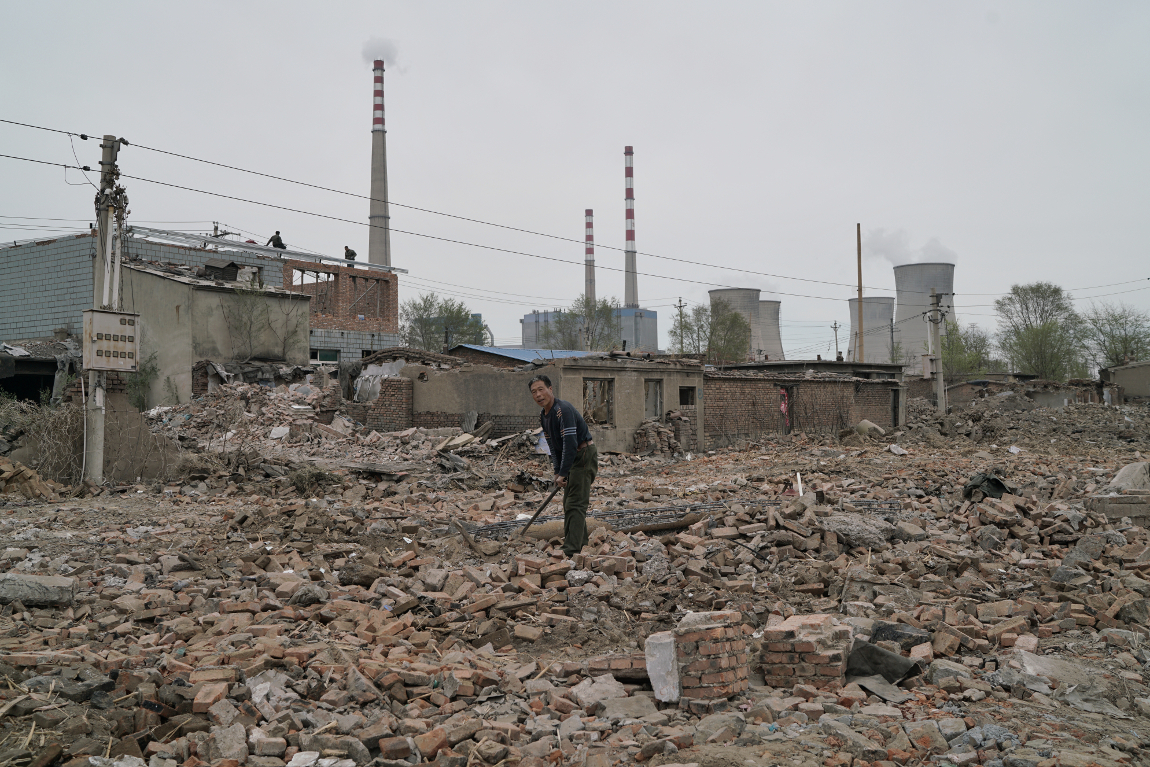 A pile of rubble now stands on the site of the old dormitory buildings. Like Huang Anyuan, many former residents have chosen to give their allocated new homes to their children, while they rent tiny rooms elsewhere. 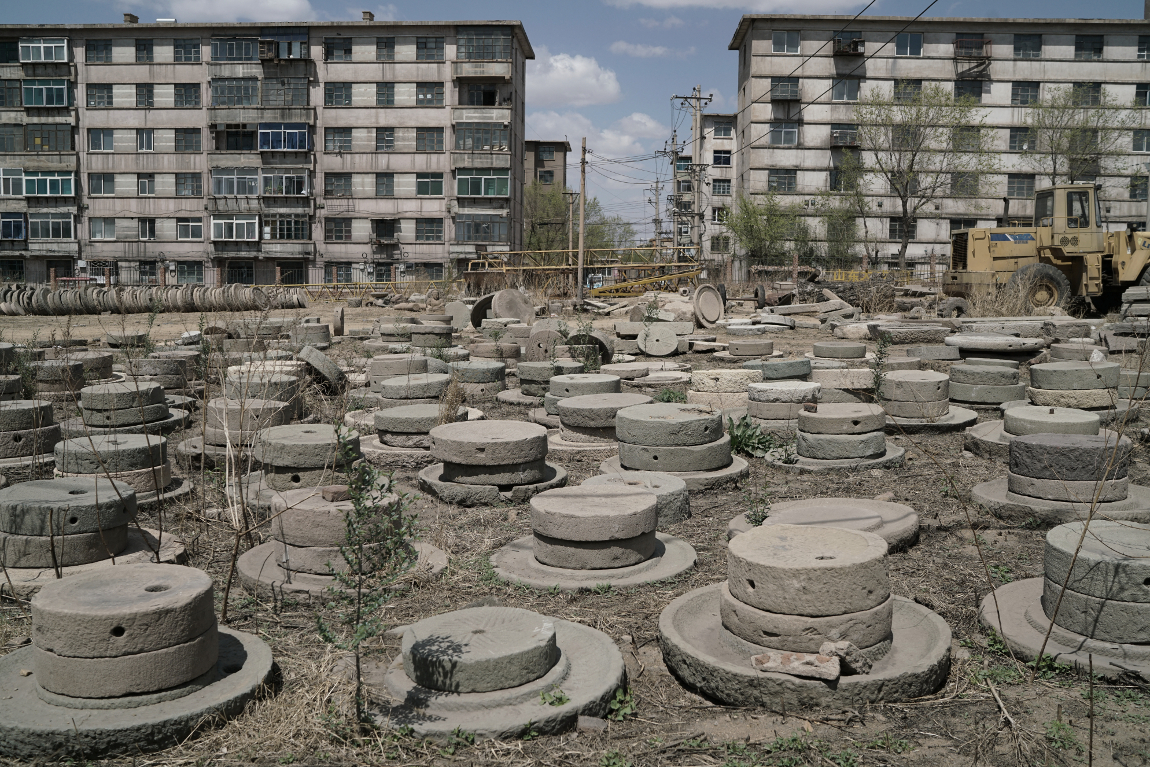 As former mining villages have been demolished, one collector has been gathering old millstones. 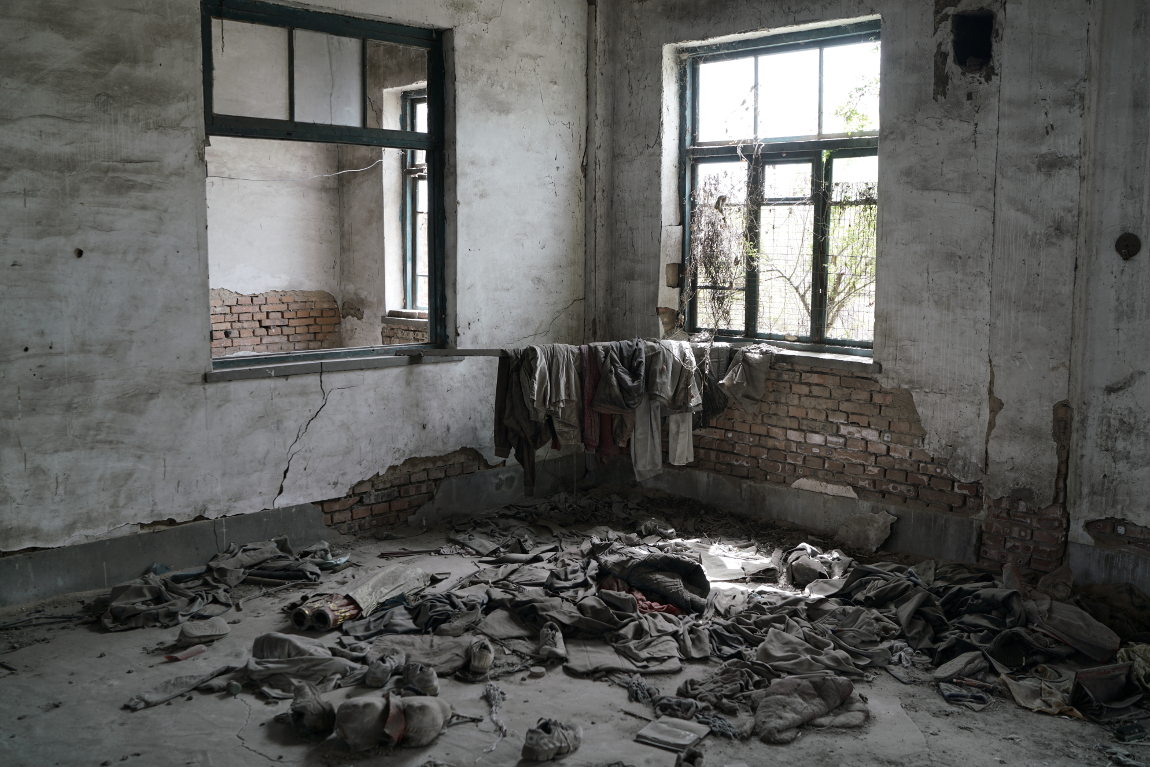 In the 1980s and 90s depletion of coal seams and increasing extraction costs meant that the city’s coal-led economy started to fail – and with it the city. The Fuxin Mining Group closed 23 mines and laid off 129,000 workers, 28.8% of all its employees. 198,000 residents of the city, a quarter of the total, receive welfare payments designed to ensure a minimum standard of living. 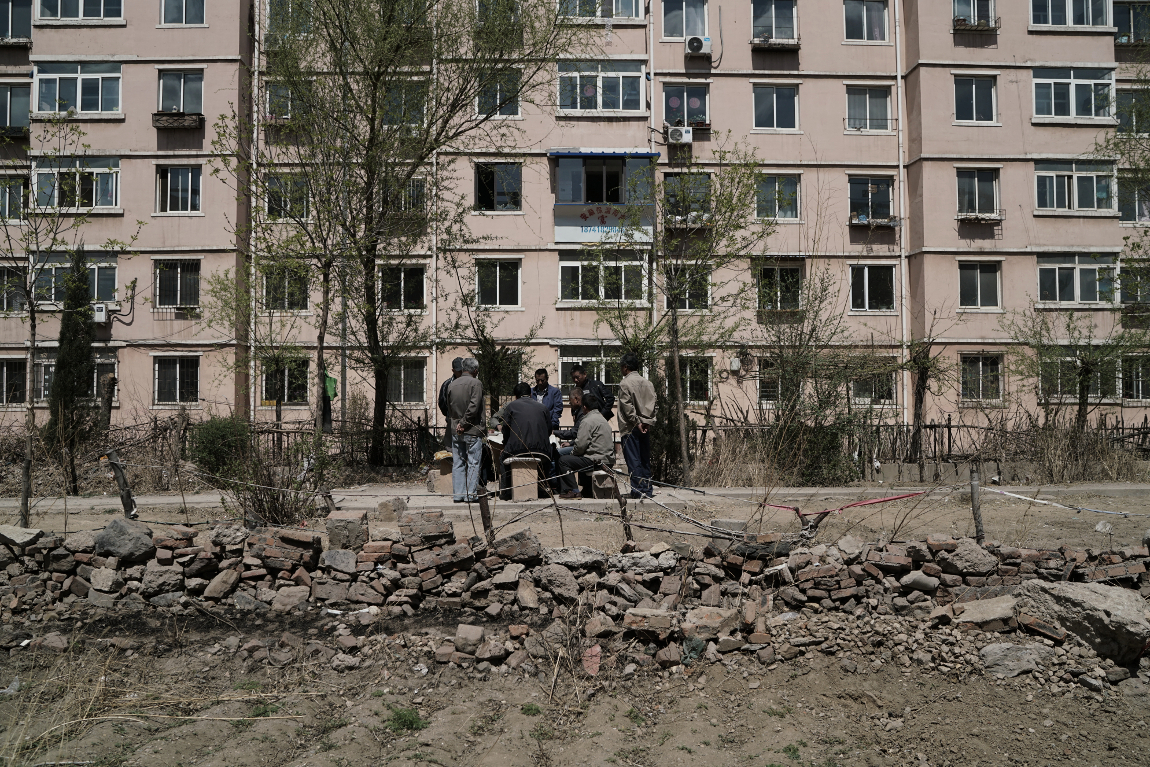 In the areas populated by former miners there are many middle aged people with little to do. In some Fuxin households, a miner’s pension may be the only income for three generations. 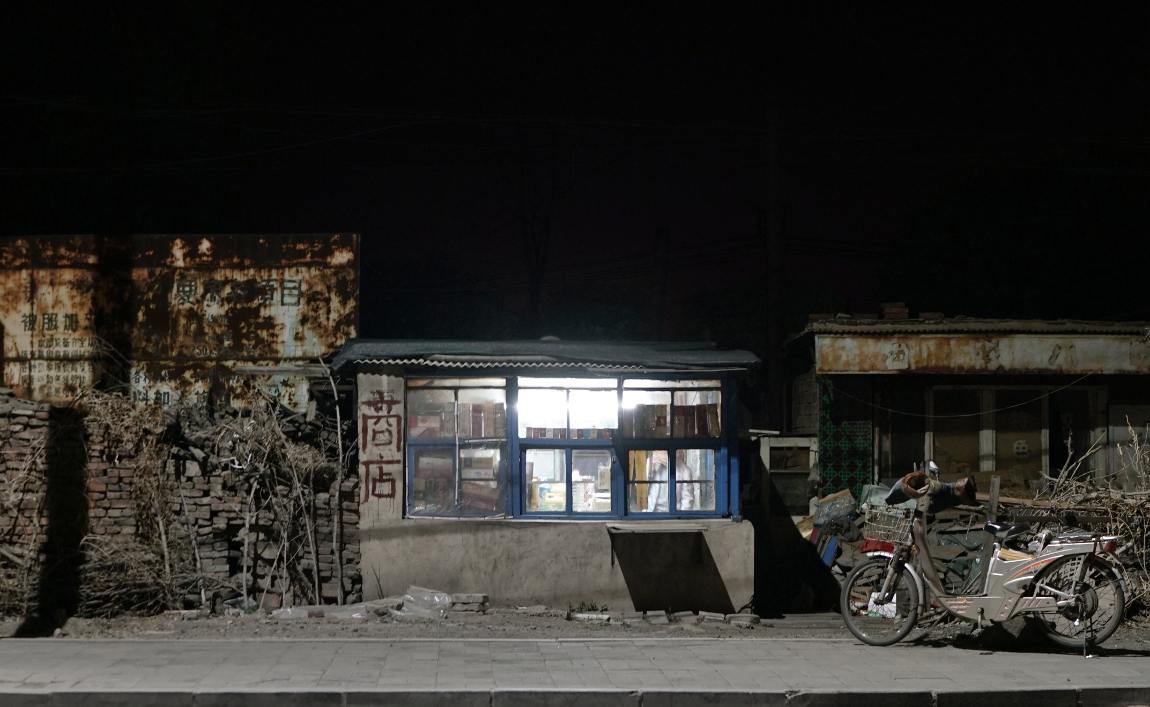 As the coal industry collapsed, finding new jobs for those laid off became more urgent. But finding work for so many manual workers in such a short time and when there were no major employers or industries available was impossible. Some have opened small shops or other small businesses to earn spending money. 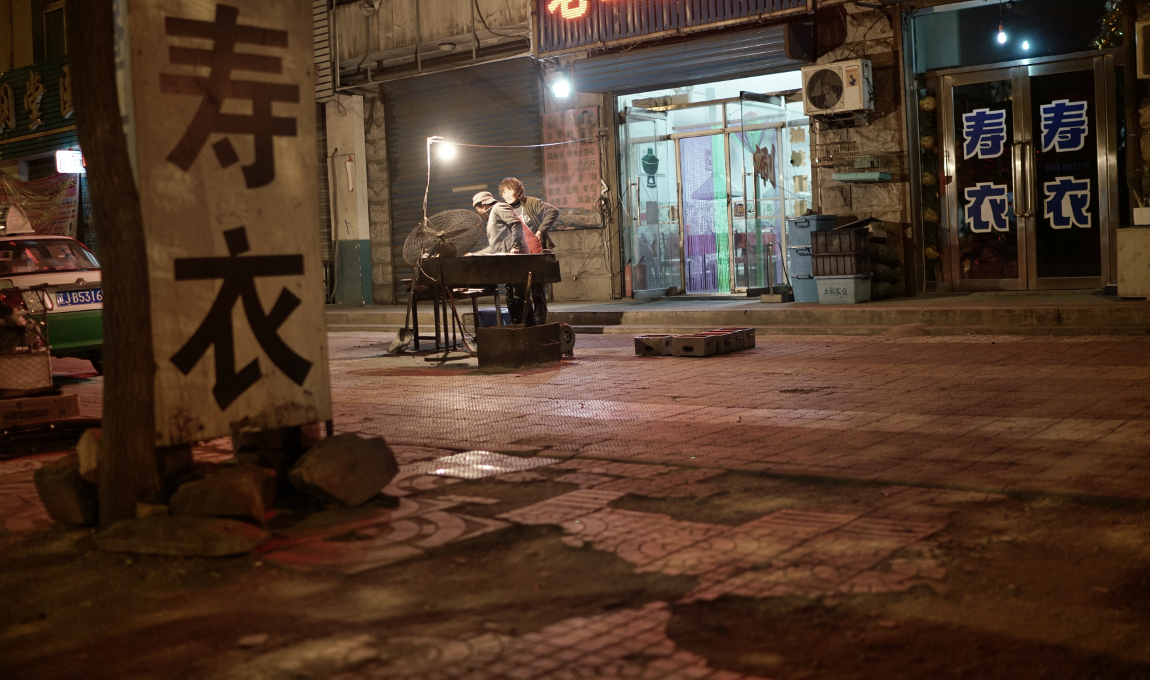 There are lots of barbecue stalls on the streets of Fuxin, more than other north-eastern cities. The locals say it’s partly because they love barbecue in the north-east, but also because this is the cheapest way to set yourself up in business after being laid off. 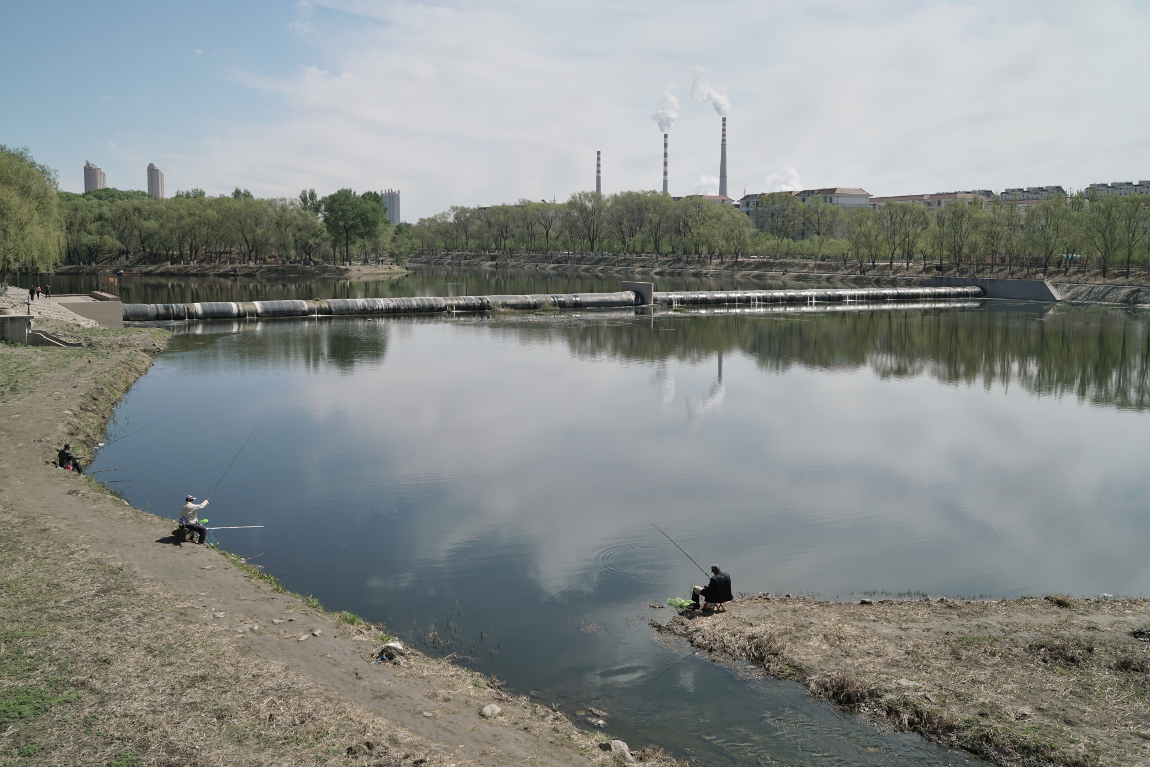 On a sunny weekend both banks of this river would be lined with middle-aged fishermen. Former city Party secretary Wang Qiong summarised the city’s economic transition plan as one of self-reliance supported by strong market and technology-led private firms. 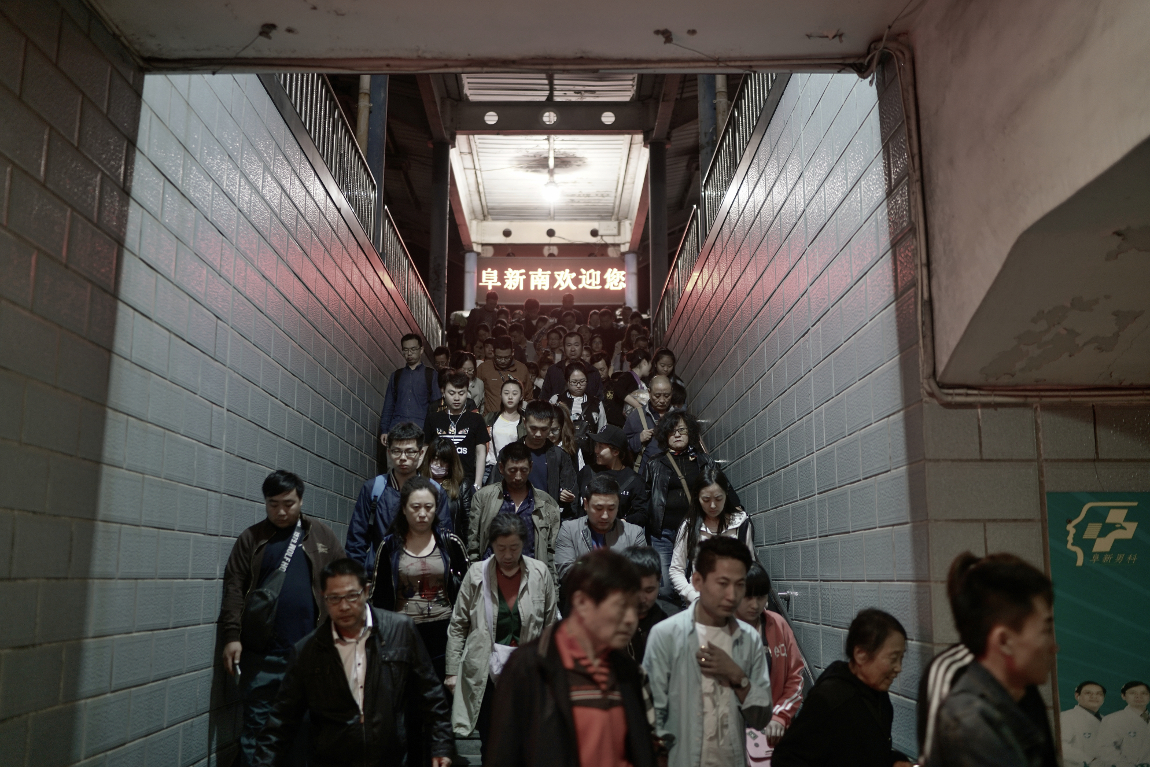 If you want a seat on the train between Fuxin and Shenyang you need to book two days in advance. The city is finally recovering after 15 years of transition, and people are starting to come back.

Here in the transition zone between the Mongolian plateau and the plains west of the Liao river, the trees in the villages around Fuxin bend in the wind. 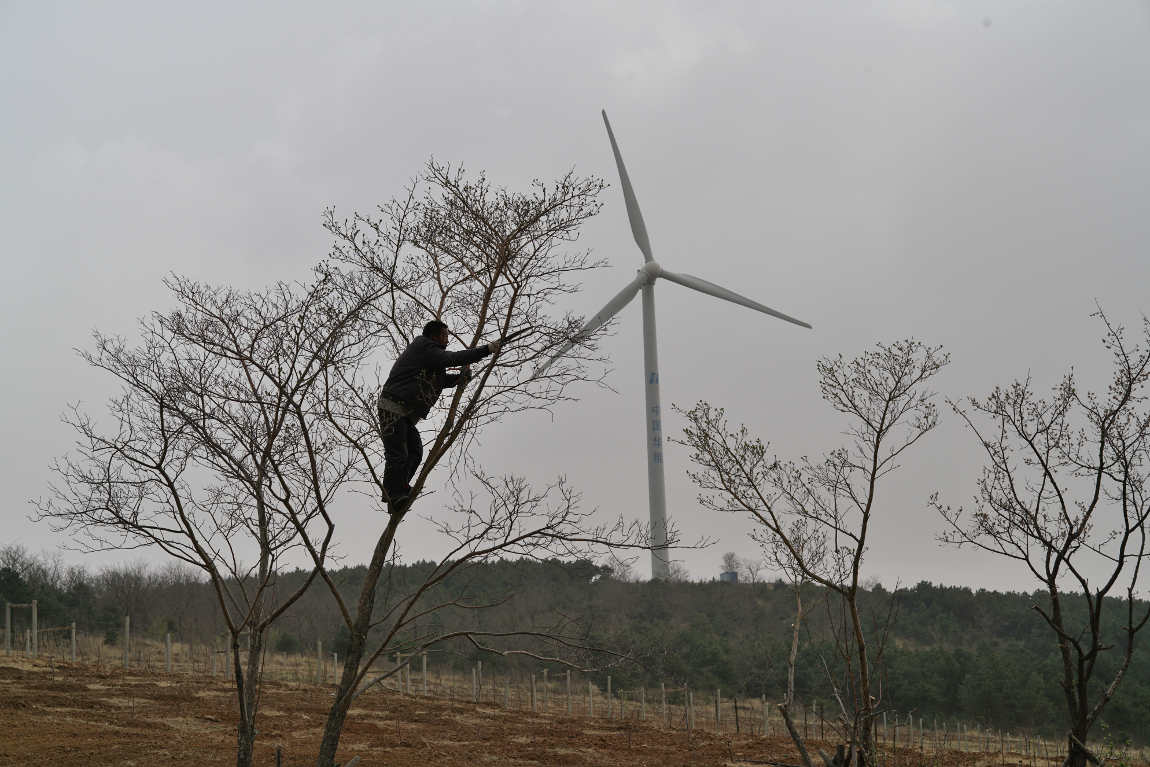 Over the past 15 years it is that wind that has provided the city with an alternative to coal energy. 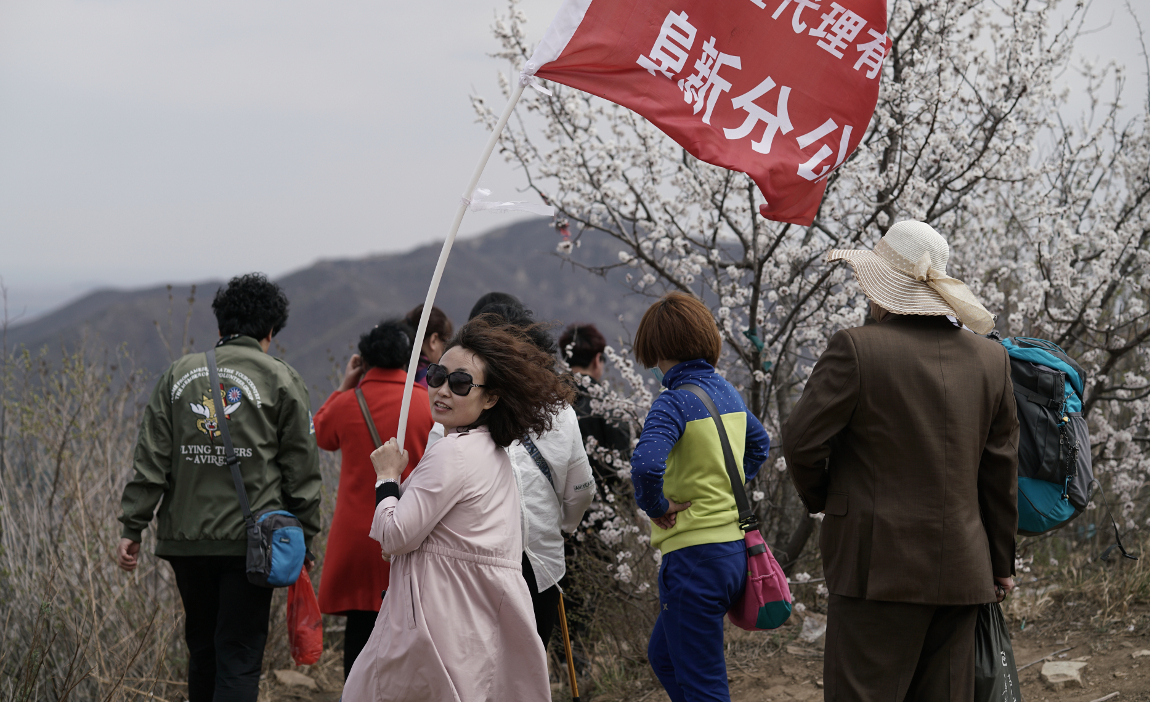 The wind turbines offer a new view from the top of Tashan. The city’s leaders are keen for the sector to replace coal. 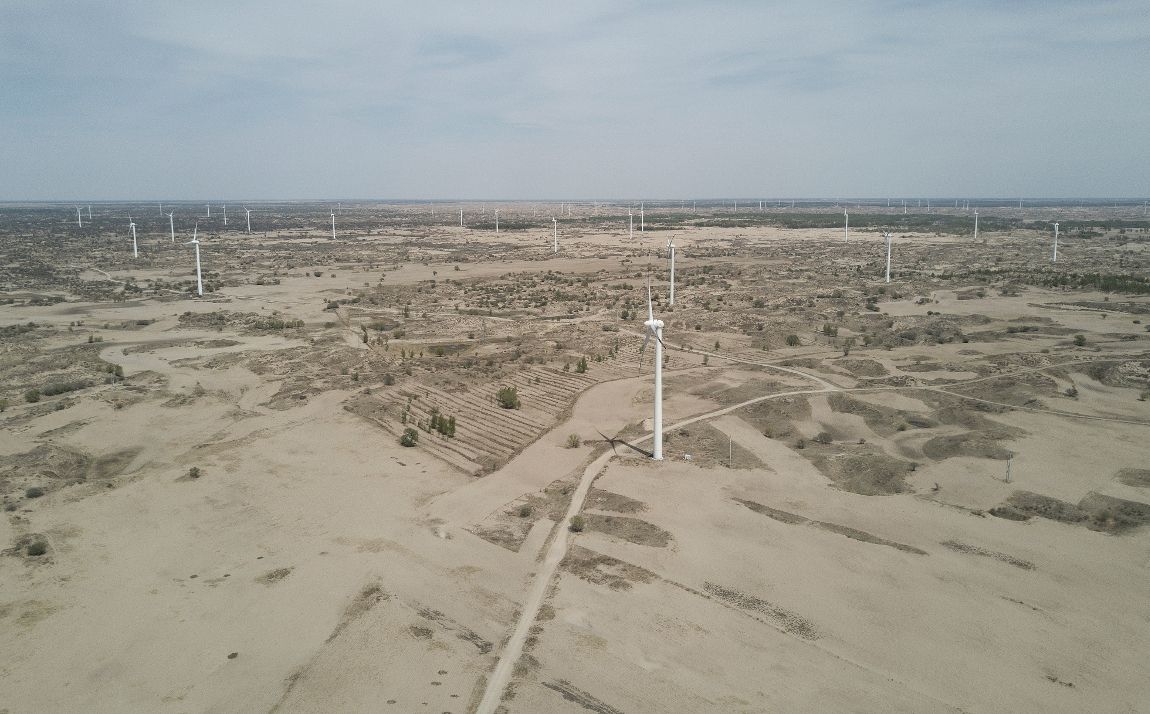 Fuxin has transitioned to an era of wind power. By the end of 2016 the city was supplying 1.89 gigawatts to the grid – 30% of Liaoning’s wind power generation. 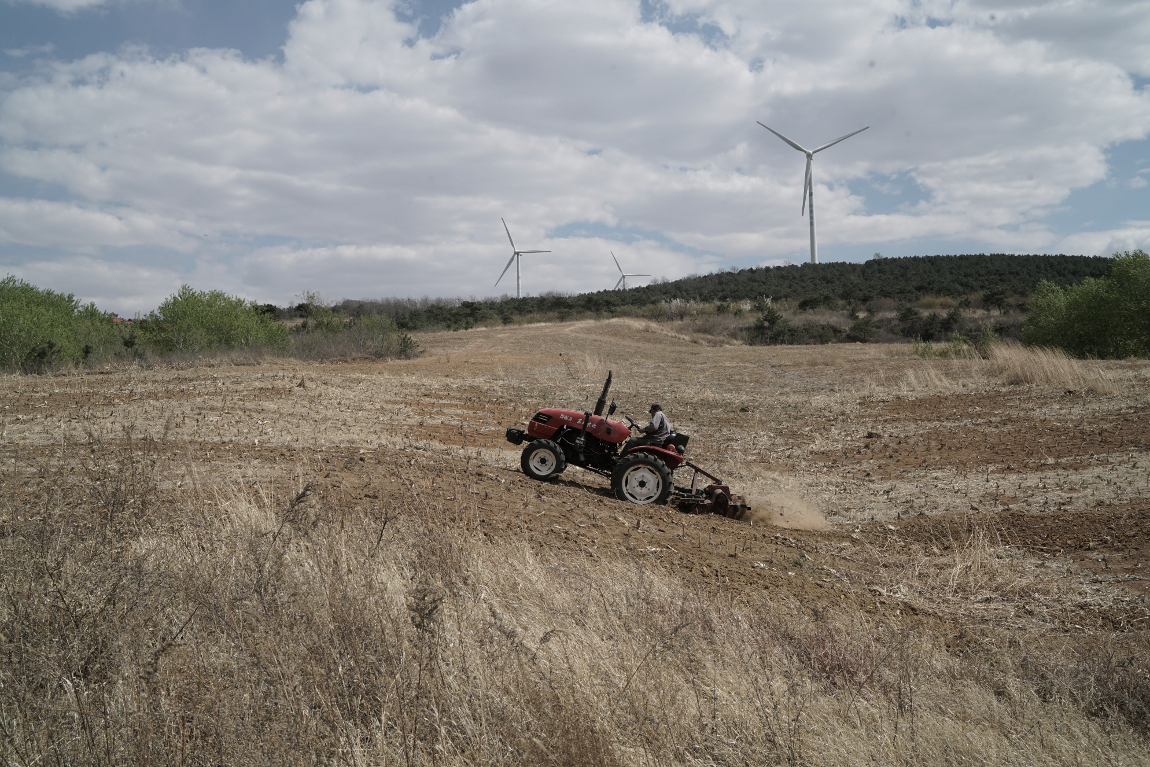 The new energy sector has created over 5,500 jobs in Fuxin. One single wind power firm, Huaneng, pays almost 200 million yuan in taxes in the city – and this is while still entitled to tax reductions. 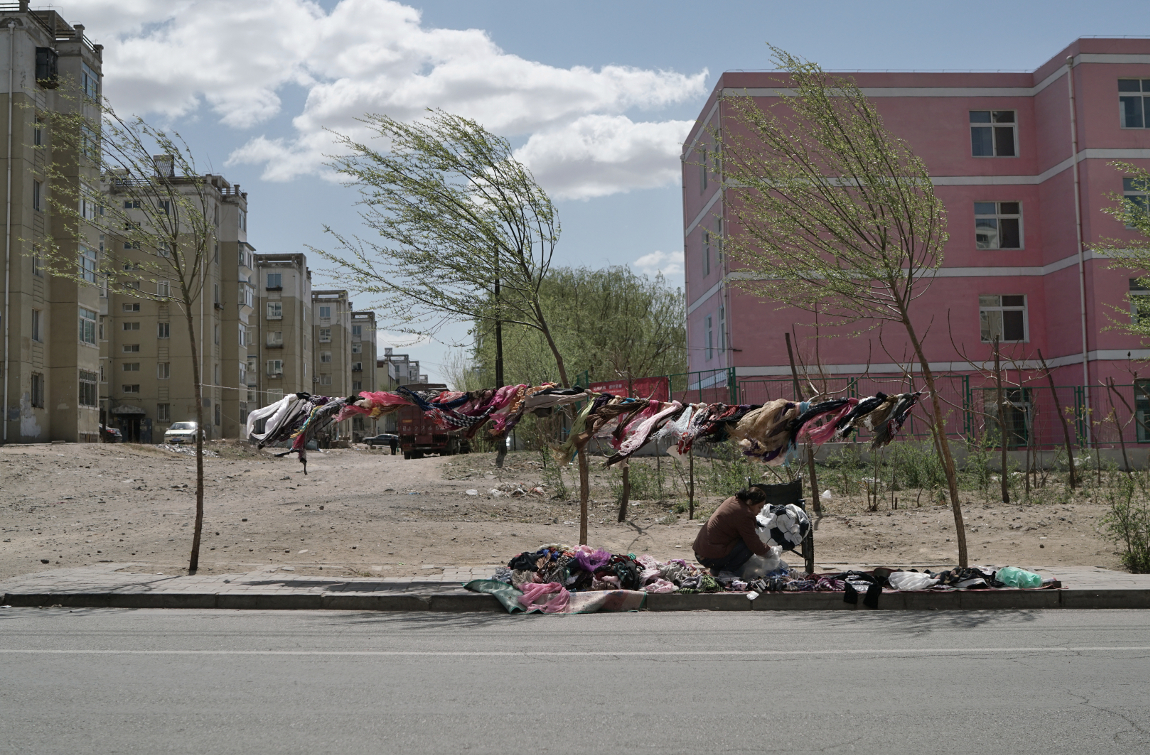 In a new village built for coal miners in the Fuxin district of Xinqiu, Gao Yuan sells silk scarves. She is also waiting for the wind having tied a line between two trees and hung her scarves from it. The one yuan scarves flutter more in the wind, which is good for sales. 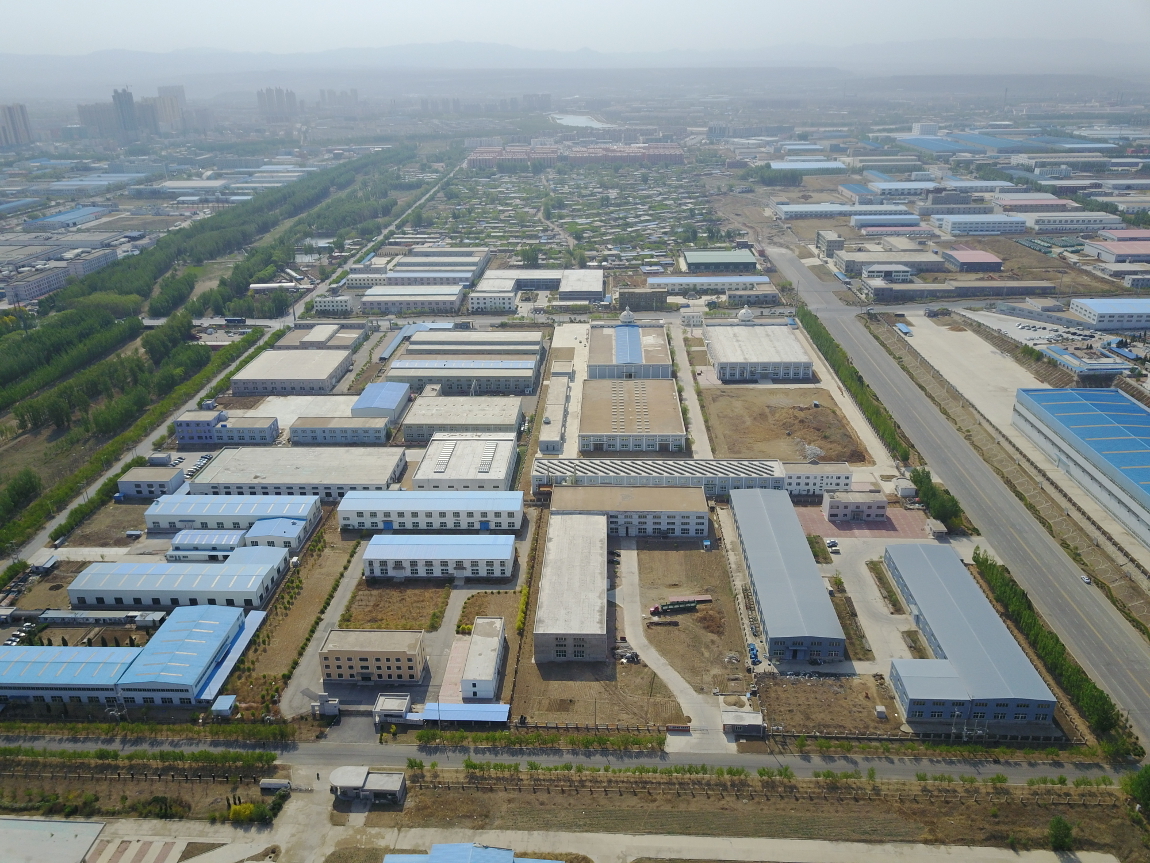