Wave after wave of elephant slaughter, driven first by European and US ivory collectors and more recently by demand in Asia, has brought the African elephant to its knees. A catastrophic decline in the past decade is primarily due to poaching to feed a continuing passion for ivory.

The poachers are mainly Africans, but their clients are often criminal gangs based in Asia who smuggle the tusks on planes and ships to countries where demand for ivory continues to grow. The largest of these is China.

Over the coming year, the Guardian will be reporting at length on efforts to arrest the decline of this unique and sensitive animal. In recognition of the fact that the elephant will not be saved without the support of Chinese consumers and the Chinese authorities, we have teamed up with chinadialogue to bring this year of in-depth reporting, expert opinion and features to consumers and readers in China.

chinadialogue, with its 10-year record of sharing environmental concerns with Chinese readers, recognises that we have reached a critical moment in the story of the elephant, one that will determine its fate for ever. We hope that readers in China and around the world will share our concern and understand that we must act before it is too late.

Our partnership begins with an explanation of the major conservation issues for not only African elephants, but their Asian cousins. This will be followed in the coming days with the translation of a moving feature from Kenya, one of the major battlegrounds for the survival of the elephant. John Scanlon, secretary-general of the UN Convention on International Trade in Endangered Species, will also give an overview of two global meetings this month that could have a major impact on the future of the elephant.

Ivory consumers are a minority in China and around the world, and awareness and concern over the problem of poaching is growing. Together we hope that respectful dialogue will alert Chinese and English readers alike to the wonder and fragility of the elephants.

Click here for the first article in the series. 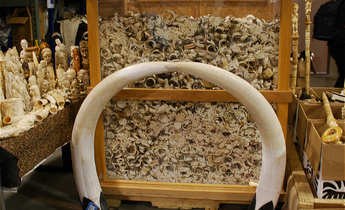